On 18 September 2009 Excalibur Almaz Ltd (EA), an international space exploration company, today held a series of events to mark its announcement of plans to provide commercial flights to and from outer space. The events, including a press briefing and VIP reception for the local business and educational community, were co-sponsored by the Isle of Man Government and by King William’s College (KWC), which is providing a temporary home for the spacecraft during its short stay on the Island. The events were a homecoming celebration for EA, which is headquartered here. Praising the Manx Government’s commitment to supporting the international space industry, EA founder and CEO Art Dula said that the company’s success to date has been due in large part to the Isle’s progressive business environment.

“The Isle of Man operates with an innovative, proactive philosophy that is enormously beneficial to any company, and particularly a new venture in an emerging market. With an infrastructure designed to foster commercial growth and success, the Isle provides an ideal environment for an entrepreneurial company such as EA. We consider the Isle to be a tremendous business asset,” Dula said.

Highlighting the celebration was the display of an Excalibur Almaz spacecraft– the cornerstone of the company’s plans to offer week-long orbital space flights beginning as early as 2013. The original Almaz space system technology, comprising reusable reentry vehicle (RRV) capsules and space stations, was developed and successfully tested in flight by NPO Machinostroyenia of Russia. EA will use updated versions of the legacy Almaz space system in order to streamline the engineering roadmap, conserve development costs, and speed time to market.

The Almaz capsule will remain on exhibit during a two-week series of public displays and educational events focused on human spaceflight, sponsored by EA in concert with IOM and KWC. As part of its corporate commitment to education, EA is exhibiting a flown space suit along with several other space artifacts and will conduct lectures for KWC and Department of Education students over the next two weeks. 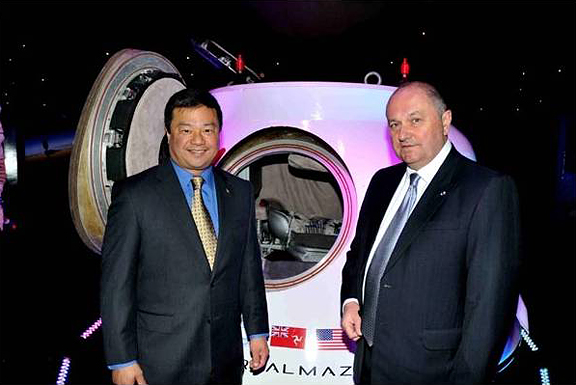 Dula said that EA encourages students to pursue education in science, math and engineering. “Hands-on experience with space hardware is the best way to help a student understand what the hardware and equipment is, how it works, and how it would feel to be in space,” he said “What better way to inspire our next generation of space farers?”

EA’s spacecraft will consist of two parts: an RRV and an expendable service module to provide crewmembers with room to comfortably operate during spaceflight. EA will update the Almaz RRVs with flight-proven technologies where appropriate, while retaining tested legacy systems to ensure safety and economy of operation. A critical feature of the RRVs is their reusability, which will reduce logistical, overhead and program costs for commercial access to space.

EA plans for its spacecraft to be compatible with a number of launch vehicles and capable of being launched from worldwide sites.

In addition to NPOM, leading aerospace firms contracting with EA include Space Flight Operations (SFO), a subsidiary of United Space Alliance, of the U.S.; Paragon Space Development Corporation of the U.S.; Qwaltec of the U.S.; EADS Astrium Space Transportation of Europe; and Japan Manned Space Systems (JAMSS) of Japan. EA has also formed strategic alliances with academic institutions including Rice University of the U.S and the International Space University of France, and is an Industry Forum member of the National Space Biomedical Research Institute of the U.S.

Established in 2005, EA is incorporated, headquartered and registered on the Isle of Man in the British Isles. EA’s support contractors are in Russia, Europe, Japan and the U.S. EA’s executives and advisors include astronauts, cosmonauts and commercial aerospace business entrepreneurs.