exactEarth Ltd. (“the Company”), a leading provider of Satellite-AIS data services, announces its financial results for the three- and six-month periods ended April 30, 2019. All financial figures are in Canadian dollars unless otherwise stated.

“In Q2, the deployment of exactView RT was completed and we now have 58 satellite payloads providing Satellite-AIS data, making us the only fully-global real-time Satellite-AIS service on the market,” said Peter Mabson, CEO of exactEarth. “This unique functionality continues to drive demand for our services, which is reflected in our strong orders and revenue growth numbers for the quarter and the year-to-date period. In particular, we continue to make deeper inroads in the commercial market through our own direct sales efforts and through the expansion of our channel partner relationships, such as the one we signed at quarter-end with MarineTraffic and the one we signed with IHSMarkit last year. As a result of these efforts, our sales in the commercial market in Q2 were up 51% year-over-year, which is a clear indication of the importance of real-time data in a market where participants face a strong competitive dynamic.”

“Subsequent to quarter-end, we celebrated the 10th Anniversary of the formation of exactEarth. Over a decade ago, we realized that AIS transmissions could potentially be received from space and we proved our thesis with the launch of the world’s first commercial AIS satellite in April 2008 utilising the patented Satellite-AIS detection technology developed by our founding team. From those humble beginnings, we pioneered the growth of a new market that gave the maritime community a completely new and innovative way to view the world’s shipping industry. With the deployment of exactView RT now completed, we continue to pioneer new capabilities and applications in the Satellite-AIS market, setting the standard for real-time data delivery, superior vessel detection and rapid update rate, among other things. I want to thank the entire team – past and present – for their efforts in creating a market, and a market leader, and we look forward to capitalizing on our potential in the coming decade and beyond.”

Order bookings for the Q2 2019 and YTD 2019 periods were $6.0 million and $9.0 million, compared to $2.6 million and $6.0 million in the same periods last year. Order bookings will fluctuate on a quarter-to-quarter basis reflecting the timing to complete new customer agreements. Revenue backlog at April 30, 2019 was $24.6 million compared to $25.9 million at the end of Q2 2018. Revenue backlog was impacted in Q2 2019 due to the renegotiation of a long-term customer contract. The Company believes that the renegotiation positions it to generate greater levels of revenue on a variable basis over time as compared to a fixed payment schedule.

Gross Margin for the Q2 2019 and YTD 2019 periods was 8% and 23% compared to 27% and 27% in the same periods last year. Gross margin decreased for the Q2 2019 and YTD 2019 periods due to the increase in cost of revenue, partially offset by higher revenue. Cost of revenue increased due to higher satellite operating costs related to the Second-Generation Constellation and increased terrestrial data costs, partially offset by lower data processing and project related costs and the SIF operating grants.

“As mentioned in our Q1 2019 earnings release, with all 58 exactView RT payloads now in orbit, certain elements of our agreement with Harris Corporation came into effect in the second quarter; this has put pressure on our Gross Margin that is expected to remain in place for the short- to mid-term,” said Sean Maybee, CFO of exactEarth. “However, over the longer-term, we expect to return to more traditional Gross Margin levels, which we believe will be driven by capitalizing on the growing exactView RT opportunities in our sales pipeline and through a number of initiatives we are pursuing to reduce costs related to both our first-and second-generation constellations.”

We measure Adjusted EBITDA as earnings before interest, taxes, depreciation and amortization (“EBITDA”), plus offering related expenses, unrealized foreign exchange losses, share-based compensation costs, restructuring costs and impairment losses, less unrealized foreign exchange gains and gains from insurance settlements. We believe that Adjusted EBITDA provides useful supplemental information as it provides an indication of the income generated by our main business activities before taking into consideration how they are financed or taxed and exclude the impact of items that are considered by management to be outside of the Company’s ongoing operating results. Adjusted EBITDA should not be construed as an alternative to net income (loss) determined in accordance with IFRS as an indicator of our performance or to cash flows from operating, investing and financing activities as a measure of liquidity and cash flows.

We define Subscription Revenue as the dollar sum of fully executed contracts for our products and/or services to our customers that are subscription-based, typically sold with a one-year period of service and recognized in our “Subscription Services” segmented revenue. 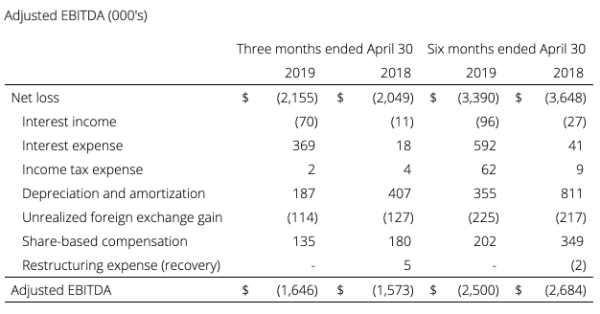 exactEarth is a leading provider of global maritime vessel data for ship tracking and maritime situational awareness solutions. Since its establishment in 2009, exactEarth has pioneered a powerful new method of maritime surveillance called Satellite AIS (“S-AIS”) and has delivered to its clients a view of maritime behaviours across all regions of the world’s oceans unrestricted by terrestrial limitations. exactEarth has deployed an operational data processing supply chain involving a constellation of satellites, receiving ground stations, patented decoding algorithms and advanced “big data” processing and distribution facilities. This ground-breaking system provides a comprehensive picture of the location of AIS equipped maritime vessels throughout the world and allows exactEarth to deliver data and information services characterized by high performance, reliability, security and simplicity to large international markets. For more information, visit exactearth.com.