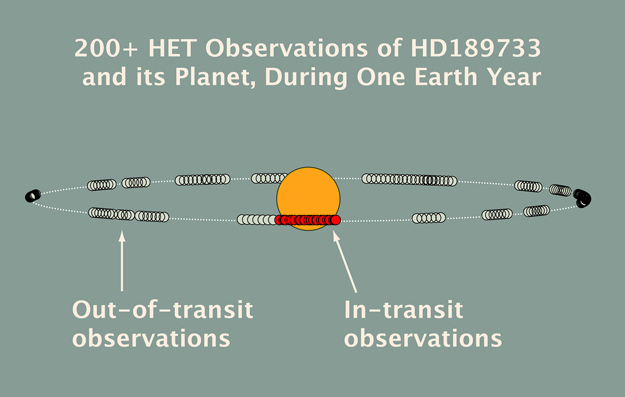 Astronomers from The University of Texas at Austin and Wesleyan University have used the Hobby-Eberly Telescope at UT Austin’s McDonald Observatory to confirm that a Jupiter-size planet in a nearby solar system is dissolving, albeit excruciatingly slowly, because of interactions with its parent star. Their findings could help astronomers better understand star-planet interactions in other star systems that might involve life.

The work will be published in the June 1 edition of The Astrophysical Journal in a paper led by Wesleyan University postdoctoral researcher Adam Jensen [http://dx.doi.org/10.1088/0004-637X/751/2/86]. The team includes University of Texas astronomers Michael Endl and Bill Cochran, as well as Wesleyan professor Seth Redfield.

The star, HD 189733, lies about 63 light-years away in the constellation Vulpecula, the little fox.

In 2010 another team studied this star in ultraviolet light with the Hubble Space Telescope and discovered that its planet (called HD 189733b) is discharging hydrogen into space.

The Texas-Wesleyan study finds that this streaming hydrogen gas — studied in a different wavelength range by one of the world’s largest ground-based telescopes — is much hotter than anyone knew. This temperature is important: It indicates that the violent flares this star is throwing out are interacting with the planet’s atmosphere.

While this planet is not thought to be a home for life, such studies could help astronomers understand how interactions between “parent” stars and their “children” planets might affect life that could arise in other star systems.

“One day we will use similar techniques to probe the atmosphere of smaller, Earth-like planets,” The University of Texas’ Endl said. “I think the pace of progress is stunning, to say the least. Twenty years ago we didn’t really know of any exoplanets, and now we probe and study their atmospheres.”

The planet HD 189733b is not like Earth — it’s a gas giant 20 percent heavier than Jupiter that orbits 10 times as close to its parent star as Mercury does to our Sun, an exotic type of planet astronomers have dubbed a “hot Jupiter.”

To date, astronomers have discovered nearly 700 planets orbiting stars in our galaxy (with billions suspected), but they have probed the atmospheres of only a handful, using space telescopes and the largest ground-based telescopes such as the Hobby-Eberly Telescope (HET).

Studies of this planet’s atmosphere are possible because it passes in front of its parent star as seen from Earth.

In 2007 as a postdoctoral researcher at McDonald Observatory, Redfield announced he had found sodium in this planet’s atmosphere. That announcement was based on hundreds of HET observations spread out over a year, taken both with the planet in front of the star (“in-transit”) and when the planet was not. Subtracting the latter from the former provided the planet’s “transmission spectrum.”

Astronomers determine the spectrum of a star or planet when spreading out the telescope-collected light into its component wavelengths — a more sophisticated version of passing light through a prism to produce a rainbow. The spectrum is like a bar code that astronomers can read to determine the object’s chemical composition, temperature, speed and direction of motion.

Today, Redfield’s postdoctoral fellow, Adam Jensen, is studying that same set of telescope observations and many more added by Endl in the intervening years.

Just determining the spectrum of a transiting planet, let alone being able to decode it, is a difficult feat. As this planet passes in front of its parent star, it blocks only 2.5 percent of the star’s total light, plus another 0.3 percent for the planet’s atmosphere. Teasing out that 0.3 percent and decoding it is the goal.

Established in 1932, The University of Texas at Austin McDonald Observatory near Fort Davis in West Texas hosts multiple telescopes undertaking a wide range of astronomical research under the darkest night skies of any professional observatory in the continental United States. McDonald is home to one of the world’s largest telescopes, the Hobby-Eberly Telescope. HET is a joint project of The University of Texas at Austin, Pennsylvania State University, Ludwig Maximilians Universitaet Muenchen, and Georg-August-Universitaet Goettingen. Stanford University was a founding partner of the consortium.