Bremen, Germany – Europe’s first Automated Transfer Vehicle ATV, has been integrated and is currently being electrically tested in Bremen. For the first time the three ATV elements are linked electrically in order to verify flight readiness: the propulsion module, the fully equipped avionics bay and the integrated cargo carrier. With the completion of these tests, the engineers from EADS SPACE Transportation have achieved another milestone on the way towards the first flight of the unmanned space transporter to the International Space Station, ISS. Under contract to the European Space Agency ESA, EADS SPACE Transportation is developing and building this completely new space vehicle. “We are highly satisfied with the test results. We have relied heavily on the expertise and competence of our engineers and the excellence of our facilities,” said Josef Kind, President of EADS SPACE Transportation, in Bremen on Wednesday.

“With ATV, Europe has developed a unique Space transportation vehicle: unmanned, fully automated and highly flexible, with a payload of 9.5 metric tonnes. ATV has the potential for further applications. We have created the space vehicle for future in-orbit services such as transport and supply.” Mr. Kind continued. 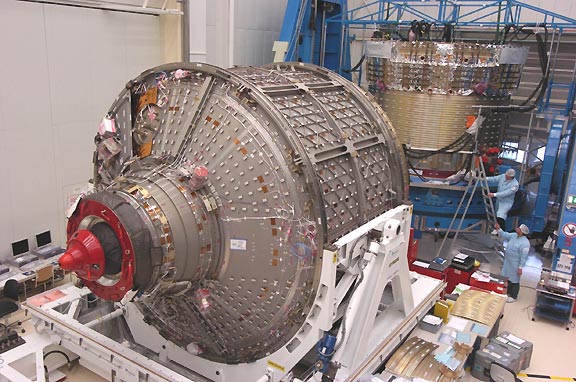 ATV is one of the largest and technically most challenging Space vehicles ever developed and built in Europe. “ATV is a completely autonomous space transporter. EADS SPACE Transportation has demonstrated that it has the know-how to develop, integrate, and test such complex systems. In this I must highlight the development of the propulsion system and the avionics unit, that is the software required for flight control and automatic docking to the Space Station. We here in Europe have worked hard to achieve this over the past few years.” said Josef Kind.

ATV is Europe’s contribution to the re-supply of the International Space Station. In addition to the delivery of propellants, water, everyday supplies and experiments, the unmanned space vehicle, when docked, will be used to perform reboost manoeuvres to raise the space station. These manoeuvres are required to lift the station, which, due to atmospheric drag, is continuously descending, back up to its orbit altitude of 400 kilometres. At the end of its mission, the ATV, which has a launch weight of about 20 tonnes, a diameter of about 4.5 metres and a length of ten metres, will be loaded with waste from the space station. It will burn up during its controlled re-entry into Earth’s atmosphere.

In the next weeks, “Jules Verne”, the first ATV flight unit, will be transferred from the Bremen facilities to the ESA/ESTEC test centre in Noordwijk, the Netherlands. Here special tests will be performed to confirm ATV’s ability to survive launch conditions and the harsh space environment. Launch on the Ariane 5 from the European Spaceport in Kourou, French Guiana, is scheduled for 2005.