ESO: A “Dragon” on the Surface of Titan

New images of unsurpassed clarity have been obtained with the ESO Very Large Telescope (VLT) of formations on the surface of Titan, the largest moon in the Saturnian system. They were made by an international research team during recent commissioning observations with the “Simultaneous Differential Imager (SDI)”, a novel optical device, just installed at the NACO Adaptive Optics instrument. 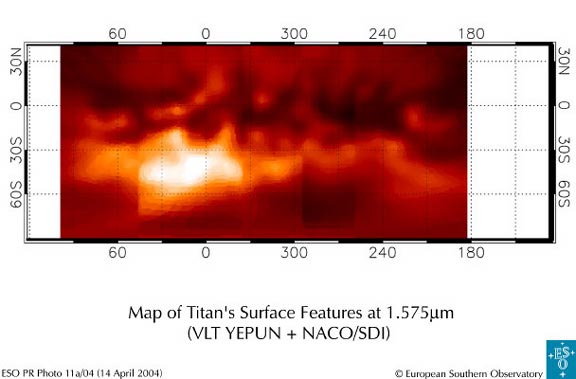 With the high-contrast SDI camera, it is possible to obtain extremely sharp images in three colours simultaneously. Although mainly conceived for exoplanet imaging, this device is also very useful for observations of objects with thick atmospheres in the solar system like Titan. Peering at the same time through a narrow, unobscured near-infrared spectral window in the dense methane atmosphere and an adjacent non-transparent waveband, images were obtained that are virtually uncontaminated by atmospheric components. They map the reflectivity of a large number of surface features in unprecedented detail.

The images show a number of surface regions with very different reflectivity. Of particular interest are several large “dark” areas of uniformly low reflectivity. One possible interpretation is that they represent huge surface reservoirs of liquid hydrocarbonates.

Whatever the case, these new observations will be most useful for the planning of the delivery of the Huygens probe – now approaching the Saturn system on the NASA/ESA Cassini spacecraft and scheduled for descent to Titan’s surface in early 2005.