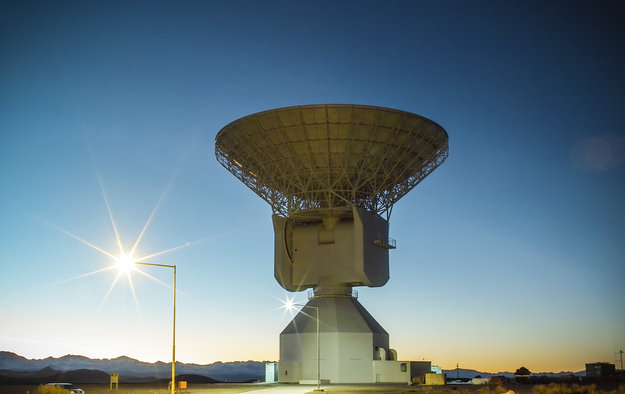 A new satellite tracking station at Malarguee, Argentina, will be formally inaugurated on Tuesday, completing the trio of deep-space stations and confirming ESA as one of the world’s most technologically advanced space organisations.

The massive radio reflector dish of ESA’s new station is the most visible indication of the impressive technology that will soon track missions voyaging hundreds of millions of kilometres deep in our Solar System. Forty metres tall and with a moving antenna assembly weighing 610 tonnes, the station strikes a starkly beautiful pose 1500 m up on an arid Argentinian plain, where high tech meets the high Pampas. In addition to tracking missions at Mars and Venus, it can also conduct radio science experiments, allowing scientists in Europe and Argentina to study the matter through which the spacecraft-ground communication signals travel.

In exchange for hosting it for a planned 50 years, the station’s capacity will be shared with Argentina, whose CONAE national space office was an instrumental partner. Station technology by the numbers “Malarguee station receives X- and Ka-band radio signals, significantly boosting its ability to receive large amounts of data from very far away,” says ESA’s Roberto Madde, station project manager. “It’s a marvellous piece of engineering, and years of design and development work at the Agency will come to fruition next week.

We were helped a lot by our Argentinian partners in the making of the station and this collaboration shows how good is the relationship between ESA and CONAE.”

A 20 kW amplifier enables transmission of telecommands hundreds of millions of kilometres into space, while low-noise amplifiers cooled to -258oC enable receipt of ultra-weak signals from beyond Jupiter. To compare: the smartphone in your pocket transmits using a puny battery at about 125 milliwatts. This is millions of times more powerful than the signals that Malarguee can receive.