The most northerly active volcano on Russia’s Kamchatka Peninsula is once again erupting, dusting the surrounding snow-white landscape with a wide expanse of dark ash that is visible from 800 km away in space.

This image of the Kamchatka Peninsula on Russia’s East Coast was acquired on 11 May 2004 by the Medium Resolution Imaging Spectrometer (MERIS) instrument on ESA’s Envisat satellite in reduced resolution mode.

Two thirds of the way up the Peninsula can be seen a roughly circular band of ash, and at the high point of this band is located the steep-sided 3283-metre-high Shiveluch stratovolcano. An aerial cloud of steam and possibly ash originating from the peak is also faintly visible against the ocean to the east of the Peninsula.

Part of the volcanic ‘Ring of Fire’ chain located around the Pacific, Shiveluch – also known as Sheveluch – last erupted in 2001. After a two-year lull volcanic activity began again at the start of this year, and on 9 May the volcano underwent an explosive eruption, propelling ash and volcanic gases into the atmosphere up to eight km above sea level.

The locally-based Kamchatkan Volcanic Eruptions Response Team has observed a lava dome growing in the crater and warn that another explosive eruption could be due at any time. Strong volcanic tremors and surface earthquakes have been detected, while heavy mudslides from Shiveluch have also blocked roads in the area. 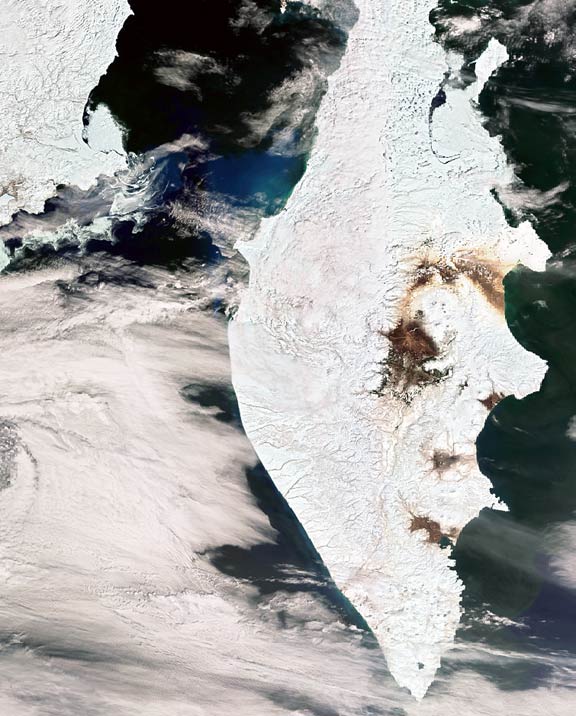