This has been a significant year for ESA’s Directorate of Human Spaceflight and, in particular, for the International Space Station. During 2009, ESA astronaut Frank De Winne became the first European Commander of the station, and ESA carried out two missions, OasISS and Alissé, to the station.

During the OasISS mission, a comprehensive European research programme was realised with many experiments utilising the internal facilities and external research platforms of the Columbus laboratory. For the Alissé mission, ESA astronaut Christer Fuglesang was in charge of operations involving the Italian-built Multi-Purpose Logistics Module (MPLM) Leonardo and participated in two key spacewalks. 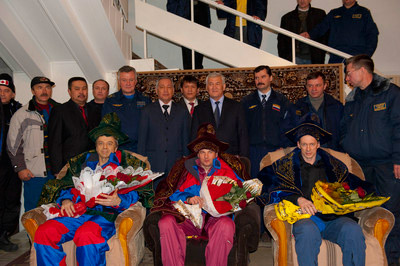 In addition to the human missions, Europe’s second Automated Transfer Vehicle, ATV-2 Johannes Kepler’s integration is progressing well with a launch readiness set for 30 November 2010. Furthermore, ESA signed a contract for the Advanced Re-entry Vehicle (ARV) Advanced Phase A tasks that will provide Europe with a?? Where is the rest of this sentence?luable experiments.

In the development of technological and Life Support capabilities for future missions, the signature of the European Experimental Re-entry Testbed (Expert) contract, the PHARAO atomic clock agreement and the inauguration of the second generation MELiSSA pilot plant took place this year. The launch operations and vehicle recovery contract for Expert was also signed on 2 December in Moscow between ESA and the Russian Makeyev State Rocket Centre, while the PHARAO agreement paves the way for the launch of a high-accuracy atomic clock ensemble called ACES that will be attached to the outside of the European Columbus laboratory onboard ISS. Finally, MELiSSA is an artificial ecosystem that could one day recycle waste products and supply essential food, water and oxygen to humans living on the surface of the Moon or Mars.

Another successful inter-agency partnership came to fruition this year with the handover of Node-3 from ESA to NASA on 20 November. Node-3 is also the connecting point for the European-built observation module Cupola, which enables monitoring robotics operations and observation of our home planet. Once these modules are attached to the ISS in February 2010, more than one-third of the pressurised ISS elements will have been built in Europe.

Looking towards future developments, a Call for Ideas was issued to gage the interest in deploying the International Space Station (ISS) as a platform to conduct research in global climate change, while excellent responses have been received to the three ELIPS research solicitations and the Lunar Lander Request for Information.

With these successes, the Directorate has also managed to reach and inspire the youngest generation. Several educational and promotional events have been accomplished this year including the ‘Take your classroom into space’ activity. Educators throughout Europe were invited to propose new ideas for experiments that were carried out on board the ISS by De Winne to demonstrate the effects of freefall to European students.

Inspired by this fruitful year, the Directorate of Human Spaceflight proudly releases an annual achievement video for the interest of its supporters. This video highlights the accomplishments realised in 2009 and also mentions the upcoming flight opportunities of ESA astronauts Roberto Vittori and Paolo Nespoli announced for 2010, and André Kuipers for 2011. These accomplishments are the results of the efforts of many staff and numerous collaborators. We anticipate that the coming year’s plans will play a pivotal role in preparing the future in Human Spaceflight and Human Exploration.