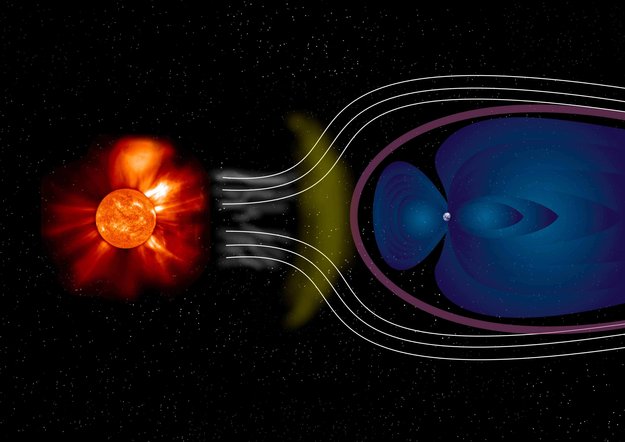 European and Chinese scientists have recommended the Solar wind Magnetosphere Ionosphere Link Explorer as their candidate for a collaborative science mission for launch in 2021.

Smile would be launched into a highly inclined, elliptical orbit that would take it almost a third of the way to the Moon. From this orbit it would be able to make continual observations of key regions in near-Earth space.

These would include simultaneous images and movies of the magnetopause (the boundary between Earth’s magnetosphere and the solar wind), the polar cusps (two regions, one in each hemisphere, where solar wind particles have a direct access to Earth’s ionosphere), and the auroral oval (the region around each geomagnetic pole where auroras most often occur).

X-ray and ultraviolet imagers are proposed to study global distributions of auroras, along with instruments to measure the energetic particles in the solar wind, and changes in the local magnetic field.

This joint venture between ESA and China follows on from the success of the Double Star / Tan Ce missions that provided multipoint measurements of near-Earth space from 2004 to 2008, working in concert with ESA’s Cluster satellites.

However, it will be the first time that ESA and China jointly select, design, implement, launch and operate a space mission.

The latest initiative began with two workshops in China and Europe. ESA’s Directorate of Science and Robotic Exploration and the National Space Science Center (NSSC) under the Chinese Academy of Sciences (CAS) then issued a joint call for proposals in January this year.

A total of 13 proposals, covering a range of topics in astrophysics, heliophysics and fundamental physics, were received. Following a joint peer review process carried out by the scientific communities of Europe and China, with the support of ESA and CAS, Smile was identified as the top candidate.

A preliminary study will now assess the proposal, prior to beginning the formal selection process in autumn.

After the official go-ahead has been given to Smile, it will enter a two-year study phase, followed by a four-year implementation phase, aiming for launch in 2021.

The payload and satellite will be provided by scientists and industry from both Europe and China. The mission will be implemented by ESA’s Science Programme and NSSC, CAS.