ESA’s Envisat has captured the changes in direction of the rapidly-growing oil spill in the Gulf of Mexico as strong winds over the weekend pushed it around and hampered clean-up efforts.

In these latest images, the oil spill is visible due east of the Delta National Wildlife Refuge extending into the Gulf. The white dots are oil rigs and ships.

Wind can easily spread oil on the water, with the course determined by the wind’s direction and speed. Following the explosion of the drilling rig on 22 April that produced the oil leak, the winds were blowing west-northwest. On Saturday winds were blowing from the southeast, pushing the slick toward Louisiana. 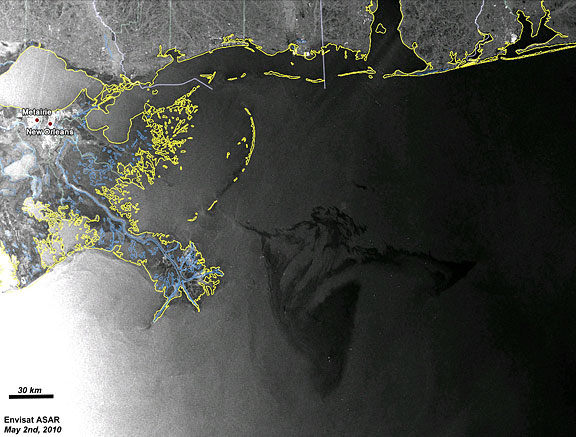 Radar image acquired on 2 May

Radar is especially suited for detecting oil spills because it works day and night, can see through clouds (unlike optical sensors) and is particularly sensitive to the smoother water surface caused by the oil. Depending on the situation, oil is harder to detect in optical satellite observations because the surface changes are not as pronounced. 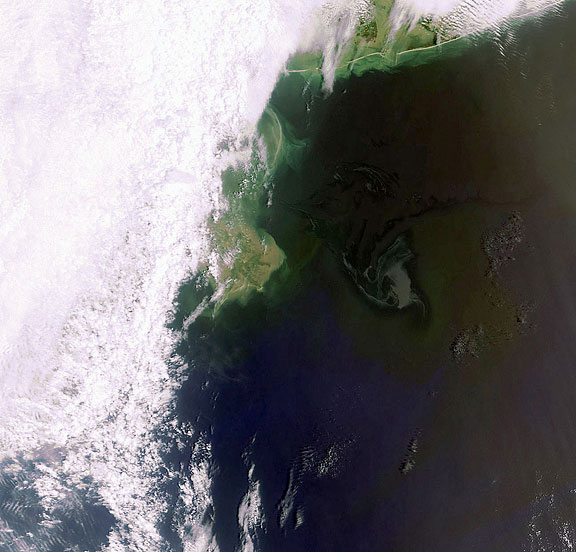 Envisat optical image of the oil spill in the Gulf of Mexico, acquired from its Medium Resolution Imaging Spectrometer (MERIS) on 2 May 16:10 UTC (Sunday morning local time). Credits: ESA

To see the latest MERIS images of the oil spill, visit our MIRAVI website. MIRAVI, which is free and requires no registration, generates images from the raw data collected by MERIS and provides them online quickly after acquisition.

The next ASAR and MERIS images of the oil spill are scheduled for 5 May, with the images being made available about two hours later.

Envisat images are being provided to US authorities immediately after they are acquired through the International Charter Space and Major Disasters. On 22 April the US Geological Survey, on behalf of the US Coast Guard, requested the Charter to provide rapid access to radar and optical satellite imagery of the oil slick.

Since then, Envisat MERIS and ASAR data have been provided in near-real time and have been used by the US National Oceanic and Atmospheric Administration.

The Charter is an international collaboration between space agencies to put satellite remote sensing at the service of civil protection agencies and others in response to natural and man-made disasters.