Enceladus Plume is a New Kind of Plasma Laboratory

By SpaceRef Editor
May 31, 2012
Filed under Cassini, Jet Propulsion Laboratory, Saturn, US 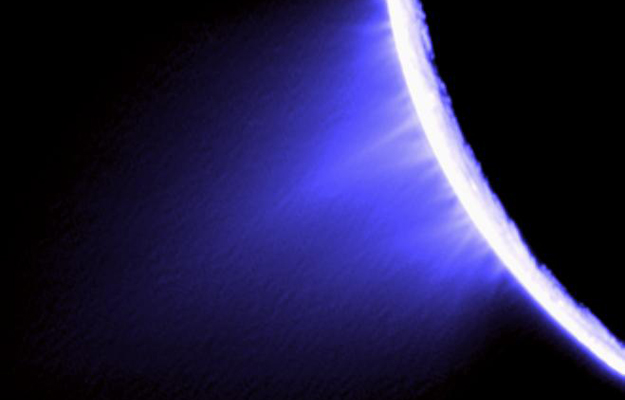 Recent findings from NASA’s Cassini mission reveal that Saturn’s geyser moon Enceladus provides a special laboratory for watching unusual behavior of plasma, or hot ionized gas. In these recent findings, some Cassini scientists think they have observed “dusty plasma,” a condition theorized but not previously observed on site, near Enceladus.

Data from Cassini’s fields and particles instruments also show that the usual “heavy” and “light” species of charged particles in normal plasma are actually reversed near the plume spraying from the moon’s south polar region. The findings are discussed in two recent papers in the Journal of Geophysical Research.

“These are truly exciting discoveries for plasma science,” said Tamas Gombosi, Cassini fields and particles interdisciplinary scientist based at the University of Michigan, Ann Arbor. “Cassini is providing us with a new plasma physics laboratory.”

Ninety-nine percent of the matter in the universe is thought to be in the form of plasma, so scientists have been using Saturn as a site other than Earth to observe the behavior of this cloud of ions and electrons directly. Scientists want to study the way the sun sends energy into Saturn’s plasma environment, since that jolt of energy drives processes such as weather and the behavior of magnetic field lines. They can use these data to understand how Saturn’s plasma environment is similar to and different from that of Earth and other planets.

The small, icy moon Enceladus is a major source of ionized material filling the huge magnetic bubble around Saturn. About 200 pounds (about 100 kilograms) of water vapor per second – about as much as an active comet – spray out from long cracks in the south polar region known as “tiger stripes.” The ejected matter forms the Enceladus plume – a complex structure of icy grains and neutral gas that is mainly water vapor. The plume gets converted into charged particles interacting with the plasma that fills Saturn’s magnetosphere.

The nature of this unique gas-dust-plasma mixture has been revealed over the course of the mission with data from multiple instruments, including the Cassini plasma spectrometer, magnetometer, magnetospheric imaging instrument, and the radio and plasma wave science instrument. What scientists found most interesting is that the grains range continuously in size from small water clusters (a few water molecules) to thousandths of an inch (100 micrometers). They also saw that a large fraction of these grains trap electrons on their surface. Up to 90 percent of the electrons from the plume appear to be stuck on large, heavy grains.

In a paper published in the December issue of the journal, a team of Swedish and U.S. scientists on the Cassini mission examined radio and plasma wave science instrument observations from four flybys of Enceladus during 2008. They found a high plasma density (both ions and electrons) within the Enceladus plume region, although the electron densities are usually much lower than the ion densities in the plumes and in the E ring. The team concluded that dust particles a hundred millionth to a hundred thousandth of an inch (a nanometer to micrometer) in size are sweeping up the negatively charged electrons. The mass of the observed “nanograins” ranges from a few hundred to a few tens of thousands of atomic mass units (proton masses), and must therefore contain tens to thousands of water molecules bound together. At least half of the negatively charged electrons are attached to the dust, and their interaction with the positively charged particles causes the ions to be decelerated. Because the dust is charged and behaves as part of the plasma cloud, this paper distinguishes this state of matter from dust that just happens to be in plasma.

“Such strong coupling indicates the possible presence of so-called ‘dusty plasma’, rather than the ‘dust in a plasma’ conditions which are common in interplanetary space,” said Michiko Morooka from the Swedish Institute of Space Physics, lead author of the paper and a Cassini radio and plasma wave science co-investigator. “Except for measurements in Earth’s upper atmosphere, there have previously been no in-situ observations of dusty plasma in space.”

In a dusty plasma, conditions are just right for the dust to also participate in the plasma’s collective behavior. This increases the complexity of the plasma, changes its properties and produces totally new collective behavior. Dusty plasma are thought to exist in comet tails and dust rings around the sun, but scientists rarely have the opportunity to fly through the dusty plasma and directly measure its characteristics in place.

A separate analysis, based on data obtained by the Cassini plasma spectrometer, revealed the presence of nanograins having an electric charge corresponding to a single excess electron. “The Cassini plasma spectrometer has enabled us to discover and analyze new classes of charged particles that were wholly unanticipated when the instrument was designed and built in the 1980s and 90s,” said Tom Hill, the study’s lead author and a co-investigator based at Rice University in Houston.

The nature of the Enceladus plume has been revealed over time due to the synergistic nature of the fields and particles instruments on Cassini, which has been in residence in Saturn’s magnetosphere since 2004. Following the original detection of the plume based on magnetometer measurements, Sven Simon from the University of Cologne, Germany, and Hendrik Kriegel from the University of Braunschweig, Germany, found that the observed perturbation of Saturn’s magnetic field required the presence of negatively charged dust grains in the plume. These findings were reported in the April and October 2011 issues of Journal of Geophysical Research Space Physics. Previous data obtained by the ion and neutral mass spectrometer revealed the complex composition of the plume gas, and the cosmic dust analyzer revealed that the plume grains were rich in sodium salts. Because this scenario can only arise if the plume originated from liquid water, it provides compelling evidence for a subsurface ocean.

Cassini will continue to study the complex nature of the plume region in the three planned additional flybys of Enceladus. The Cassini-Huygens mission is a cooperative project of NASA, the European Space Agency and the Italian Space Agency. The Jet Propulsion Laboratory, a division of the California Institute of Technology in Pasadena, manages the mission for NASA’s Science Mission Directorate, Washington. More Cassini information is at http://www.nasa.gov/cassini and http://saturn.jpl.nasa.gov .