Astronomers gathered among the stone-carved heads of Easter Island on Sunday to witness a total eclipse of the Sun. Meanwhile, 720 km away in space, ESA’s Proba-2 was focused on the same target.

The microsatellite’s orbit fell outside the path of totality, so only a partial eclipse was seen – but it was still a valuable scientific opportunity.
This eclipse was actually Proba-2’s second. The first occurred on 15 January, while it was being commissioned. This time around, the satellite, equipped with a quartet of scientific instruments focused on the Sun and space weather, was fully operational.

As a US eclipse expedition studied the fine structures of the Sun’s corona in visible light, Proba-2’s SWAP telescope provided views of the same features at extreme ultraviolet (EUV) wavelengths.

“SWAP’s EUV perspective helps track magnetic structures from their origin on the solar surface to locations high above,” said Dan Seaton of the Royal Observatory of Belgium (ROB), which operates SWAP.

“And because SWAP is sensitive to one type of coronal emission – from highly ionised atoms – its results help astronomers to differentiate the eclipse’s various sources of light to characterise the processes involved.

“SWAP’s observations were coordinated as part of a larger, international scientific campaign. For example, Proba-2 pointed away from the Sun just before and after the eclipse to contribute to a composite super-wide-field image of the EUV corona, searching for apparent voids in the corona that remain dimly understood.

Astronomers will combine SWAP imagery with observations from the ground as well as images from other satellites such as Japan’s Hinode and NASA’s Solar Dynamics Observatory.” 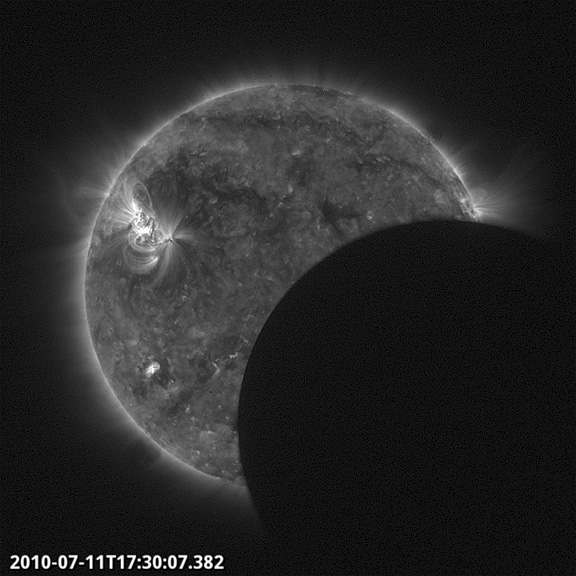 “The Sun’s illumination is not uniform,” explained Marie Dominque of ROB. “LYRA is a radiometer recording overall solar radiation so doesn’t produce any image.

“However, we want to know how the light is distributed, and how the signal changes as we approach the Sun’s edge. This is called ‘limb darkening’ – or ‘limb brightening’ in this case, since in the shortest two of our four observing wavelengths we see more brightness, not less.”

LYRA results will be reviewed against SWAP imagery, she added: “In a couple of channels during January’s eclipse we didn’t pick up the expected v-shaped curves as the Moon moved in and out. It turned out to be a sign of active regions on the Sun.”

Proba-2’s other pair of instruments investigated the eclipse’s effects. Incoming solar radiation ionises upper layers of Earth’s atmosphere, giving rise to the electrically charged ‘ionosphere’. But when the shadow of an eclipse falls on Earth an effective hole is formed in the local ionosphere.
DSLP and TPMU chart plasma variations within the ionosphere. They performed a special set of measurements.

“This event gave us a useful opportunity to study the ionospheric response to solar radiation changes,” said Stepan Stverak of the Czech Astronomical Institute.

“The DSLP worked in a burst mode to gather ionospheric properties during the eclipse, for comparison to the unperturbed ionosphere surveyed before and afterwards.”

Results are also being checked against those of French Demeter microsatellite, flying a previous generation of ESA plasma sensors.