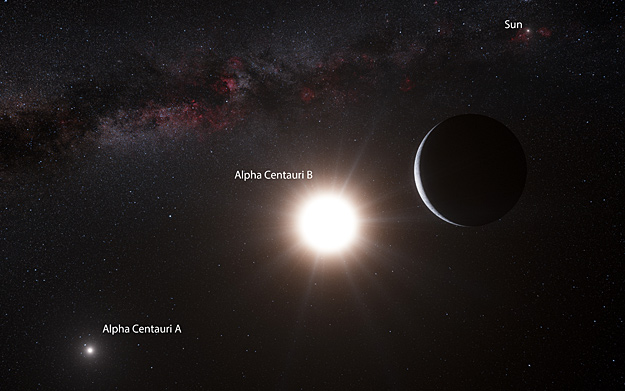 European astronomers have discovered a planet with about the mass of the Earth orbiting a star in the Alpha Centauri system — the nearest to Earth. It is also the lightest exoplanet ever discovered around a star like the Sun. The planet was detected using the HARPS instrument on the 3.6-meter telescope at ESO’s La Silla Observatory in Chile. The results will appear online in the journal Nature on 17 October 2012.

Alpha Centauri is one of the brightest stars in the southern skies and is the nearest stellar system to our solar system — only 4.3 light-years away. It is actually a triple star — a system consisting of two stars similar to the Sun orbiting close to each other, designated Alpha Centauri A and B, and a more distant and faint red component known as Proxima Centauri [1]. Since the nineteenth century astronomers have speculated about planets orbiting these bodies, the closest possible abodes for life beyond the solar system, but searches of increasing precision had revealed nothing. Until now.

“Our observations extended over more than four years using the HARPS instrument and have revealed a tiny, but real, signal from a planet orbiting Alpha Centauri B every 3.2 days,” says Xavier Dumusque (Geneva Observatory, Switzerland, and Centro de Astrofisica da Universidade do Porto, Portugal), lead author of the paper. “It’s an extraordinary discovery and it has pushed our technique to the limit!”

The European team detected the planet by picking up the tiny wobbles in the motion of the star Alpha Centauri B created by the gravitational pull of the orbiting planet [2]. The effect is minute — it causes the star to move back and forth by no more than 51 centimeters per second (1.8 km/hour), about the speed of a baby crawling. This is the highest precision ever achieved using this method.

Alpha Centauri B is very similar to the Sun but slightly smaller and less bright. The newly discovered planet, with a mass of a little more than that of the Earth [3], is orbiting about six million kilometers away from the star, much closer than Mercury is to the Sun in the solar system. The orbit of the other bright component of the double star, Alpha Centauri A, keeps it hundreds of times further away, but it would still be a very brilliant object in the planet’s skies.

The first exoplanet around a Sun-like star was found by the same team back in 1995 and since then there have been more than 800 confirmed discoveries, but most are much bigger than the Earth, and many are as big as Jupiter [4]. The challenge astronomers now face is to detect and characterize a planet of mass comparable to the Earth that is orbiting in the habitable zone [5] around another star. The first step has now been taken [6].

“This is the first planet with a mass similar to Earth ever found around a star like the Sun. Its orbit is very close to its star and it must be much too hot for life as we know it,” adds Stephane Udry (Geneva Observatory), a co-author of the paper and member of the team, “but it may well be just one planet in a system of several. Our other HARPS results, and new findings from Kepler, both show clearly that the majority of low-mass planets are found in such systems.”

“This result represents a major step towards the detection of a twin Earth in the immediate vicinity of the Sun. We live in exciting times!” concludes Xavier Dumusque.

ESO will hold an online press conference offering journalists the opportunity to discuss the result and its impact with the scientists: http://www.eso.org/public/announcements/ann12072/

[2] HARPS measures the radial velocity of a star — its speed towards or away from the Earth — with extraordinary precision. A planet in orbit around a star causes the star to regularly move towards and away from a distant observer on Earth. Due to the Doppler effect, this radial velocity change induces a shift of the star’s spectrum towards longer wavelengths as it moves away (called a redshift) and a blueshift (towards shorter wavelengths) as it approaches. This tiny shift of the star’s spectrum can be measured with a high-precision spectrograph such as HARPS and used to infer the presence of a planet.

[3] Using the radial velocity method, astronomers can only estimate a minimum mass for a planet as the mass estimate also depends on the tilt of the orbital plane relative to the line of sight, which is unknown. But, from a statistical point of view, this minimum mass is often close to the real mass of the planet.

[4] NASA’s Kepler mission has found 2300 candidate planets using an alternative method — searching for the slight drop in the brightness of a star as a planet passes in front of it (transits) and blocks some of the light. The majority of planet candidates detected by this transit method are very distant from us. But, in contrast, the planets found by HARPS are around stars close to the Sun — with the new discovery being the closest yet. This makes them better targets for many kinds of additional follow-up observations such as characterizing the planet’s atmosphere.

[5] The habitable zone is a narrow annular region around a star in which water may be present in liquid form if conditions are right.

[6] ESPRESSO, the Echelle SPectrograph for Rocky Exoplanet and Stable Spectroscopic Observations, is to be installed on the ESO Very Large Telescope. Currently undergoing final design, it is scheduled to start operating in late-2016 or early-2017. ESPRESSO will feature radial velocity precision of 0.35 km/hour or less. For comparison, Earth induces a 0.32 km/hour radial velocity on the Sun. This resolution should thus enable ESPRESSO to discover Earth-mass planets in the habitable zone. The ESPRESSO consortium is led by team members responsible for the current discovery.

This research was presented in a paper “An Earth mass planet orbiting Alpha Centauri B”, to appear online in the journal Nature on 17 October 2012.

The year 2012 marks the 50th anniversary of the founding of the European Southern Observatory (ESO). ESO is the foremost intergovernmental astronomy organization in Europe and the world’s most productive ground-based astronomical observatory by far. It is supported by 15 countries: Austria, Belgium, Brazil, the Czech Republic, Denmark, France, Finland, Germany, Italy, the Netherlands, Portugal, Spain, Sweden, Switzerland and the United Kingdom. ESO carries out an ambitious program focused on the design, construction and operation of powerful ground-based observing facilities enabling astronomers to make important scientific discoveries. ESO also plays a leading role in promoting and organizing cooperation in astronomical research. ESO operates three unique world-class observing sites in Chile: La Silla, Paranal and Chajnantor. At Paranal, ESO operates the Very Large Telescope, the world’s most advanced visible-light astronomical observatory and two survey telescopes. VISTA works in the infrared and is the world’s largest survey telescope and the VLT Survey Telescope is the largest telescope designed to exclusively survey the skies in visible light. ESO is the European partner of a revolutionary astronomical telescope ALMA, the largest astronomical project in existence. ESO is currently planning the 39-meter European Extremely Large optical/near-infrared Telescope, the E-ELT, which will become “the world’s biggest eye on the sky”.

Design A Spacesuit For ESA