By SpaceRef Editor
January 10, 2001
Filed under National Science Foundation, US

Geological evidence suggests that Earth may have had surface water –and thus conditions to support life — billions of years earlier than previously thought. Scientists reconstructed the portrait of early Earth by reading the telltale chemical composition of the oldest known terrestrial rock. The 4.4-billion-year-old mineral sample suggests that early Earth was not a roiling ocean of magma, but instead was cool enough for water, continents, and conditions that could have supported life. The age of the sample may also undermine accepted current views on how and when the moon was formed. The research was supported in part by the National Science Foundation (NSF), and is published in this week’s issue of the journal Nature. 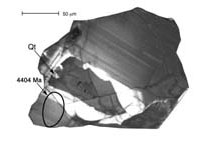 Cathodoluminescence image of the oldest known material from the
Earth, a single crystal of zircon from the Jack Hills
metaconglomerate, Western Australia. Concentric, magmatic growth
zoning is shown about the crystal core. The crystallization age of
4.40Ga (4004+-4Ma) was determined from the circled area by ion
microprobe. The arrow points to an inclusion of quartz. The high
oxygen isotope ratio from this sample suggests that low temperature
surficial processes including liquid water were important for the
formation of protoliths to this magma.”

To download a higher resolution version of this image, see http://www.news.wisc.edu/newsphotos/zircon.html 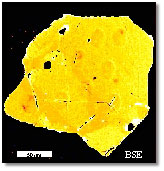 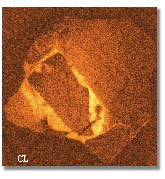 “This appears to be evidence of the earliest existence of liquid water on our planet,” says Margaret Leinen, assistant director of NSF for geosciences.
“If water occurred this early in the evolution of earth, it is possible that primitive life, too, occurred at this time.”

By probing a tiny grain of zircon, a mineral commonly used to
determine the geological age of rocks, scientists from the University
of Wisconsin-Madison, Colgate University, Curtin University in Australia and
the University of Edinburgh in Scotland have found evidence that 4.4
billion years ago, temperatures had cooled to the 100-degree Centigrade
range, a discovery that suggests an early Earth far different from the one previously imagined.

“This is an astounding thing to find for 4.4 billion years ago,” says
John Valley, a geologist at UW-Madison. “At that time, the Earth’s surface should have been a magma ocean. Conventional wisdom would not have predicted a low-temperature environment. These results may indicate that the Earth cooled faster than anyone thought.” Previously, the oldest evidence for liquid water on Earth, a precondition and catalyst for life, was from a rock estimated to be 3.8 billion years old.

The accepted view on an infant Earth is that shortly after it first
formed 4.5 to 4.6 billion years ago, the planet became little more
than a swirling ball of molten metal and rock. Scientists believed it
took a long time, perhaps 700 million years, for the Earth to cool to
the point that oceans could condense from a thick, Venus-like atmosphere. For 500 million to 600 million years after the Earth was formed, the young planet was pummeled by intense meteorite bombardment. About 4.45 billion years ago, a Mars-size object is believed to have slammed into the Earth, creating the moon by blasting pieces of the infant planet into space.

The new picture of the earliest Earth is based on a single, tiny
grain of zircon from western Australia found and dated by Simon
Wilde, of the School of Applied Geology at Curtin University of Technology in Perth, Western Australia. Valley worked with William Peck, a geologist at Colgate University, to analyze oxygen isotope ratios, measure rare earth elements, and determine element composition in a grain of zircon that measured little more than the diameter of two human hairs.
Colin Graham’s laboratory analyzed the zircon to obtain the oxygen isotope ratios. Graham is a contributor to the paper and geochemist at the
University of Edinburgh.

“What the oxygen isotopes and rare earth analysis show us is a high
oxygen isotope ratio that is not common in other such minerals from
the first half of the Earth’s history,” Peck says. In other words,
the chemistry of the mineral and the rock in which it developed could
only have formed from material in a low-temperature environment at
Earth’s surface.

“This is the first evidence of crust as old as 4.4 billion years, and
indicates the development of continental-type crust during intense
meteorite bombardment of the early Earth,” Valley says. “It is
possible that the water-rock interaction (as represented in the
ancient zircon sample) could have occurred during this bombardment,
but between cataclysmic events.”

Scientists have been searching diligently to find samples of the
Earth’s oldest rocks. Valley and Peck say such ancient samples are
extremely rare because rock is constantly recycled or sinks to the
hot mantle of the Earth. Over the great spans of geologic time, there
is little surface material that has not been recycled and reprocessed
in this way.

The tiny grain of zirconium silicate or zircon found by Wilde in
western Australia was embedded in a larger sample containing
fragments of material from many different rocks, Valley says. Zircons
dated at 4.3 billion years were reported from the same site a decade
ago, but the new-found zircon grain is more than 100 million years
older than any other known sample, giving scientists a rare window to
the earliest period of the Earth.

“This early age restricts theories for the formation of the moon,” Valley says. “Perhaps the moon formed earlier than we thought, or by a different process.” Another intriguing question is whether or not life may have arisen at that early time. Low temperatures and water are preconditions for life. The earliest known biochemical evidence for life and for a hydrosphere is estimated at 3.85 billion years ago, and the oldest microfossils are 3.5 billion years old.

“It may have been that life evolved and was completely extinguished
several times” in catastrophic, meteorite-triggered extinction events
well before that, Valley says. The research conducted by Valley, Peck, Graham and Wilde was also supported by the U.S. Department of Energy, the U.K. Natural Environment Research Council and a Dean Morgridge Wisconsin Distinguished Graduate Fellowship.

Note to reporters and editors–For images of the rock and crystal, see: http://www.nsf.gov/od/lpa/news/press/01/pr0102.htm

Editors: A high-resolution image is available for downloading at:
http://www.news.wisc.edu/newsphotos/zircon.html.