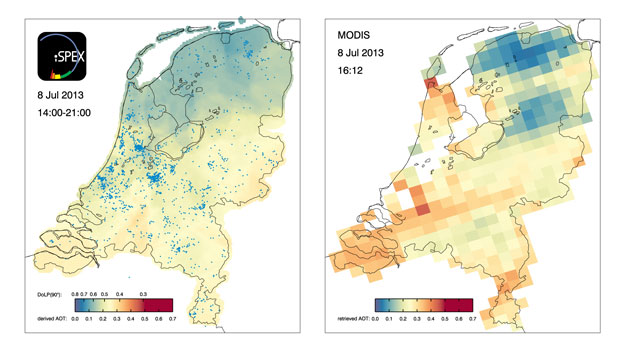 Measurements by thousands of citizen scientists in the Netherlands using their smartphones and the iSPEX add-on are delivering accurate data on dust particles in the atmosphere that add valuable information to professional measurements. The iSPEX team, led by Frans Snik of Leiden University, analyzed all measurements from three days in 2013 and combined them into unique maps of dust particles above the Netherlands. The results match and sometimes even exceed those of ground-based measurement networks and satellite instruments.

The iSPEX maps achieve a spatial resolution as small as 2 kilometers whereas satellite data are much courser. They also fill in blind spots of established ground-based atmospheric measurement networks. The scientific article that presents these first results of the iSPEX project is being published today in Geophysical Research Letters.

The iSPEX team developed a new atmospheric measurement method in the form of a low-cost add-on for smartphone cameras [1]. The iSPEX app instructs participants to scan the blue sky while the phone’s built-in camera takes pictures through the add-on. The photos record both the spectrum and the linear polarization [2,3] of the Sunlight that is scattered by suspended dust particles, and thus contain information about the properties of these particles. While such properties are difficult to measure, much better knowledge on atmospheric particles is needed to understand their effects on health, climate and air traffic.

Thousands of participants performed iSPEX measurements throughout the Netherlands on three cloud-free days in 2013. This large-scale citizen science experiment allowed the iSPEX team to verify the reliability of this new measurement method.

After a rigorous quality assessment of each submitted data point, measurements recorded in specific areas within a limited amount of time are averaged to obtain sufficient accuracy. Subsequently the data are converted to Aerosol Optical Thickness (AOT), which is a standardized quantity related to the total amount of atmospheric particles. The iSPEX AOT data match comparable data from satellites and the AERONET ground station at Cabauw, the Netherlands. In areas with sufficiently high measurement densities, the iSPEX maps can even discern smaller details than satellite data.

Team leader Snik: “This proves that our new measurement method works. But the great strength of iSPEX is the measurement philosophy: the establishment of a citizen science network of thousands of enthusiastic volunteers who actively carry out outdoor measurements. In this way, we can collect valuable information about atmospheric particles on locations and/or at times that are not covered by professional equipment. These results are even more accurate than we had hoped, and give rise to further research and development. We are currently investigating to what extent we can extract more information about atmospheric particles from the iSPEX data, like their sizes and compositions. And of course, we want to organize many more measurement days.”

With the help of a grant that supports public activities in Europe during the International Year of Light 2015, the iSPEX team is now preparing for the international expansion of the project. This expansion provides opportunities for national and international parties to join the project. Snik: “Our final goal is to establish a global network of citizen scientists who all contribute measurements to study the sources and societal effects of polluting atmospheric particles.”

The iSPEX citizen science project is a collaboration between Dutch research institutes [4] and thousands of volunteers (http://www.ispex.nl/participants). The scientists behind the iSPEX project are all involved in studying the atmospheres of the Earth, other solar-system planets and planets around other stars (exoplanets).

[2] Polarization is a fundamental property of light and describes the preferential direction of the electric field of the light wave. Direct sunlight is unpolarized. Sunlight that has been scattered by molecules or dust particles becomes polarized. This polarization is highest for the blue sky at 90 degrees scattering angle from the Sun. The degree of polarization decreases with increasing particle densities, and the exact polarization properties depend strongly on particle properties like the size and composition.

[3] The polarization measurement principle of iSPEX is derived from developments in astronomy and space research. The optical implementation of iSPEX was invented for the prototype of the SPEX satellite instrument to record highly accurate aerosol data on a global scale. The robust polarization measurement solution for a satellite instrument also proved simple enough for use with smartphones, and consists of a series of static optical elements (quarter-wave retarder, multiple-order retarder and polarizer) that can also be made of plastic.

[4] The iSPEX project is a collaboration between Leiden University, the Netherlands Research School for Astronomy (NOVA), SRON Netherlands Institute for Space research, KNMI Royal Netherlands Meteorological Institute, and RIVM National Institute for Public Health and the Environment, all in The Netherlands. LU/NOVA hosts the project management team and is responsible for the development of the iSPEX add-on and app. SRON developed the off-line data reduction pipeline. KNMI provided weather forecast, and analyzed comparative ground-based and satellite data. RIVM leads the application of SPEX and iSPEX instrumentation for ground-based air quality measurements. The project partners Longfonds, CNG Net, KIJK and Avantes helped recruiting participants. The iSPEX add-ons were produced by Bright Led Solutions, and the app was programmed by DDQ. The iSPEX project was supported by the O100,000 award from the Academische Jaarprijs 2012.

iSPEX8jul2013.jpg: iSPEX map compiled from all iSPEX measurements performed in the Netherlands on July 8, 2013, between 14:00 and 21:00. Each blue dot represents one of the 6007 measurements that were submitted on that day. At each location on the map, the 50 nearest iSPEX measurements were averaged and converted to Aerosol Optical Thickness, a measure for the total amount of atmospheric particles. This map can be compared to the AOT data from the MODIS Aqua satellite, which flew over the Netherlands at 16:12 local time. The relatively high AOT values were caused by smoke clouds from forest fires in North America, which were blown over the Netherlands at an altitude of 2-4 km. In the course of the day, winds from the North brought clearer air to the northern provinces.

iSPEX5sep2013: iSPEX maps compiled from all iSPEX measurements performed in the Netherlands on September 5, 2013, between 7:00-14:00 and 14:00-21:00. Each orange dot represents one of the total of 2444 measurements that were submitted on that day. The skies were relatively clear. At regional scales, patches of aerosol at ground level are discerned, which are blown into northeast directions.

iSPEXaddon.jpg: The iSPEX spectropolarimetric add-on is mounted in front of a smartphone camera, turning it into an optical device that measures aerosol properties. Measurements by thousands of participants in the iSPEX citizen science experiment match Aerosol Optical Thickness data from the ground-based AERONET station and the MODIS satellite. The iSPEX measurements add crucial information about aerosols that is not sampled by professional equipment.