By SpaceRef Editor
August 25, 2009
Filed under Earth, Earth Science, The Antarctic Sun, US

A “large boulder” sits near the northern boundary of what in environmental-protection speak is a facility zone — an area of repeated use by people. The zone is one of three designations in the Dry Valleys, an Antarctic Specially Managed Area (ASMA) . A “rock outcrop” is the only other geographic feature on the map to help orient the user. 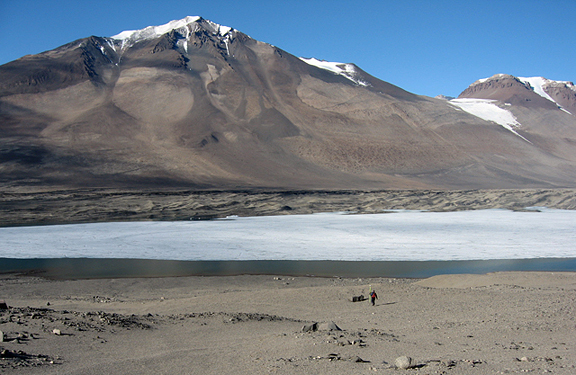 Taking advantage of commercial satellite imagery like that employed by the Antarctic Geospatial Information Center (AGIC) , the environmental department hopes to roll out a new series of area maps for the Dry Valleys ASMA in the near future. The imagery is so good that one can identify individual boulders near special features or huts at permanent field camps. [See related story: Mapping Antarctica.]

In fact, AGIC and ERA are collaborating, with the former producing a 50-map Dry Valleys ASMA atlas covering the entire area. Meanwhile, ERA is completing maps for the Dry Valleys ASMA booklet used by science groups working in the region, with updated maps of facility zones and special features.

Photo Credit: Nate Biletnikoff – Jeff Scanniello uses a high-precision GPS to help geo-reference a satellite map of the McMurdo Dry Valleys. The new detailed maps will help manage and protect the fragile environment, which is used by scientists for a variety of biological and geological research, among other studies.

In 2004, the Dry Valleys became the one of the first two official ASMA sites under the Antarctic Treaty System. Since then, the Antarctic Treaty nations have designated five additional ASMAs, including one for an area surrounding the geographic South Pole and another around Anvers Island off the Antarctic Peninsula. Both sites include U.S. Antarctic Program (USAP) research stations. [See previous story: Managed protection.]

The Protocol on Environmental Protection to the Antarctic Treaty , which entered into force in 1998, created the ASMA designation to help manage activities in scientifically and environmentally sensitive areas.

Biletnikoff said the environmental maps should also be useful to researchers for planning purposes because they will include all sorts of data, including historical information on scientific work at various locations.

“In the future, people are going to be able to go to one place and understand what type of science projects have been completed in what areas of the Dry Valleys and how those may be related to each other,” he explained. “I think this is going to be a useful tool to direct science program managers and grantees in the future.”

That’s in addition to a wealth of other historical information that the environmental department maintains, such as locations of where helicopters have landed or where spills may have occurred in the past, not to mention a catalog of fuel caches and major pieces of equipment around the continent. “We have a real good idea operationally where we have things, what resources we have available, in what part of the continent, so we can conserve on resources, ensure that supplies and instruments are not abandoned, and to minimize duplication of work,” Biletnikoff said.

Detailed Dry Valleys maps will include not only facility zones but special features that are usually geologically or biologically significant, such as Don Juan Pond, a super salty lake in the west end of Wright Valley, and Blood Falls .

The latter is a waterfall-like feature that flows from Taylor Glacier over Lake Bonney, one of several ice-covered lakes in the Dry Valleys. The falls are red because they draw water from an iron-rich pool, where scientists have recently discovered a unique microbial community. [See previous story: Ancient microbes.]

Biletnikoff noted that ASMA special features currently lack clear definitions and management plans. He said the USAP is working with Antarctica New Zealand , which had also proposed the Dry Valleys ASMA with the United States, to clarify the significance of special features.

“Our goal is to develop what constitutes a special feature and how these should be managed in comparison to areas with more stringent protection policies, such as an ASPA. Each special feature was proposed because of at least one scientifically significant aspect present at that site. As to whether these aspects require higher protection standards is currently under review,” he said.

An ASPA, or Antarctic Specially Protected Area , protects specific environmental, scientific, historic, aesthetic or wilderness values. Unlike an ASMA, they also require a permit to enter. Currently, there are more than 65 ASPAs. [See previous story: Special areas.] And there may soon be one more: Biletnikoff said the USAP is planning to propose Blood Falls as an ASPA at the 2010 Antarctic Treaty meeting.

Biletnikoff said a Blood Falls ASPA would possibly create a watershed boundary to protect the biology in the area for future study. The Antarctic Treaty nations will appoint a committee to study any proposal before making a final decision.

“If there is something clearly significant about the area — and Blood Falls is clearly significant — I don’t think that’s going to have any issues with becoming an ASPA,” Biletnikoff said. Hence, the need for highly accurate maps so that the special attributes of Antarctica are preserved for the future. The cartography work even included fieldwork to take GPS readings on specific points to geo-reference the high-resolution imagery.

“Once you get enough of these high and low points, you can easily turn that area into a three-dimensional model that is very accurate. It’s exactly what Google Earth is doing when you look at the 3D views,” Biletnikoff said. “The exciting thing is the quality of maps that we’re getting out of this.”