By SpaceRef Editor
March 1, 2013
Filed under Commerce, ISS, SpaceX, US 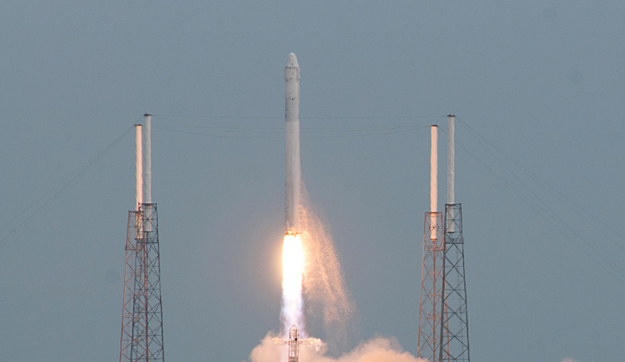 “Falcon 9 was designed to be the world’s most reliable rocket, and today’s launch validated this by adding to Falcon 9’s perfect track record with our fifth success in a row,” said Gwynne Shotwell, President of SpaceX.

After Dragon separated from Falcon 9’s second stage approximately nine minutes after launch, a minor issue with some of Dragon’s oxidation tanks was detected. Within a few hours, SpaceX engineers had identified and corrected the issue, normalizing the oxidation pressure and returning operations to normal. Dragon recomputed its ascent profile as it was designed to and is now on its way to the International Space Station (ISS) with possible arrival on Sunday, just one day past the original timeline.

Dragon is the only spacecraft in the world today capable of returning significant amounts of cargo to Earth. Dragon will stay on station for a three-week visit, during which astronauts will unload approximately 1,200 pounds of cargo and fill the capsule with return cargo, for return to Earth. Dragon is filled with supplies for the ISS, including critical materials to support science investigations. Later this month, Dragon will return a payload that includes research results, education experiments and space station hardware.

Updates on the CRS-2 mission can be found at www.spacex.com/webcast. Broadcast quality video may be downloaded at vimeo.com/spacexlaunch and high-resolution photos are posted at spacexlaunch.zenfolio.com.

SpaceX designs, manufactures, and launches the world’s most advanced rockets and spacecraft. The company was founded in 2002 by Elon Musk to revolutionize space transportation, with the ultimate goal of enabling people to live on other planets. Today, SpaceX is advancing the boundaries of space technology through its Falcon launch vehicles and Dragon spacecraft. SpaceX is a private company owned by management and employees, with minority investments from Founders Fund, Draper Fisher Jurvetson, and Valor Equity Partners. The company has more than 3,000 employees in California, Texas, Washington, D.C., and Florida. For more information, visit www.spacex.com .