By SpaceRef Editor
May 4, 2009
Filed under SpaceRef Interactive, Inc., US

Eilene Marie Galloway, one of the world’s leading experts in space law and policy, died at her home in Washington, D.C. She was 102. Dr. Galloway resided in the District of Columbia for 78 years.

In the May 15, 2006, Congressional Record, in honor of her 100th birthday, Rep. Bart Gordon (D-TN), chairman of the House Science and Technology Committee, called Dr. Galloway “an influential force in the development and analysis of domestic and international space law and policy.” She retired from the Library of Congress’s Congressional Research Service, where she was Senior Specialist in International Relations (National Security).

October 4, 1957, when the first artificial satellite began orbiting the Earth, nations reacted with fear of atomic bombs launched by rockets. Sen. Lyndon B. Johnson, Chairman of the Preparedness Subcommittee of the Senate Armed Services Committee, asked Eilene Galloway, National Defense Analyst of the Library of Congress, to serve as Staff Consultant for hearings on U.S. preparedness in space. When it became clear that the problem involved scientists and engineers in more than military aspects, the Senate organized the Special Committee on Space and Astronautics, which Eilene served by formulating questions for witnesses and analyzing testimony. 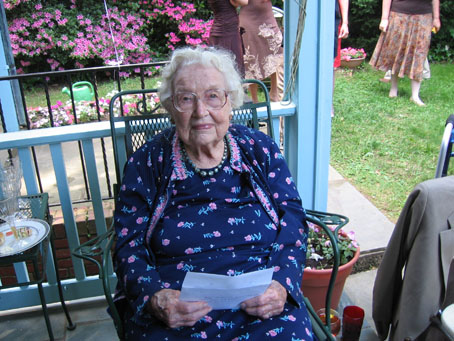 After Sputnik, Rep. John W. McCormack, Majority Leader of the House of Representatives, asked Eilene for advice on whether the House should have a Space Committee. She recommended establishing one, and he became chairman of the Select Committee on Astronautics and Space Exploration. The House Committee was first to complete space recommendations which would include the creation of a national space agency. When President Eisenhower sent Rep. McCormack the text of NASA’s organization, McCormack again asked Eilene for advice. She proposed that NASA be an Administration rather than an Agency. Mr. McCormack made the change immediately, enabling the new National Aeronautics and Space Administration to plan and coordinate across federal agencies the variety of activities involved in the development and uses of outer space.

Dr. Galloway was born Eilene Marie Slack in Kansas City, Missouri, on May 4, 1906. She was the only child of Joseph Locke Slack and Lottie Rose (Harris) Slack. Her father joined the Marines in 1915, and her mother raised her alone. In 1923, Eilene graduated from Westport High School in Kansas City, Missouri, where she was twice captain of the debate team. She received a full scholarship to Washington University in St. Louis, attending from 1923 to 1925. In 1928, she received her bachelor of arts degree in political science from Swarthmore College. She received honorary doctorates from Swarthmore (1992) and Lake Forest College (1990). She was a member of Phi Beta Kappa and Kappa Alpha Theta. On December 24, 1924, Eilene married George Barnes Galloway, who would later become a foremost expert on the workings of Congress. They had two sons, David and Jonathan. The Galloways moved to the District of Columbia in 1931.

During the Great Depression, Eilene became assistant to Aubrey Williams, assistant administrator of the Federal Emergency Relief Administration (FERA). Overseeing adult education programs nationwide, she also developed specific programs for the District of Columbia, primarily to address adult illiteracy (1934-5). She met with Eugene Meyer, publisher of the Washington Post, to ask that the paper distribute copies of a guide to adult education that she had compiled for FERA (The Emergency Education Program and College Student Aid Program of the Federal Emergency Relief Administration). Meyer initially demurred, responding that he would need some indication of demand for the publication. Eilene countered by securing orders for more than 1,600 copies, and Meyer complied with her request. The guide was so popular that it was reprinted, and ultimately the Post distributed some 175,000 copies.

Dr. Galloway was a founding member of the International Institute of Space Law (IISL). Up to her death, she continued to study and write about space

law and policy, authoring numerous papers, speeches, and opinion pieces. She opposed the weaponization of space and consistently and persuasively argued that the 1967 Outer Space Treaty has enabled the world community to maintain peace in space and should be preserved and upheld. She constantly affirmed the core principle of the 1967 U.N. Treaty on Principles Governing the Activities of States in the Exploration and Use of Outer Space, Including the Moon and Other Celestial Bodies (the Outer Space Treaty), stated in Article II: “Celestial bodies are not subject to national appropriations by claims of sovereignty, by means of use or occupation, or by any other means.”

Dr. Galloway was the recipient of many awards and honors. She was the first woman elected Honorary Fellow of the American Institute of Aeronautics and Astronautics (2006), the organization’s highest honor. She also was a fellow of the American Astronautical Society (1996), an honorary director of the International Institute of Space Law, and a Trustee Emeritus of the International Academy of Astronautics. She was the first recipient of a Lifetime Achievement Award from Women in Aerospace (1987) and was honored as well with the NASA Public Service Award and Gold Medal (1984), granted for her achievements in advising Congress about outer space and her service to international organizations including the U.N. regarding international space law.

Eilene was fearless. When she was six, her mother enrolled her in the Georgie Brown Dramatic School in Kansas City, Missouri, where she learned to be confident in front of audiences. She was one of a group of girls from the School who performed a patriotic song and dance for Theodore Roosevelt at the Muhlbach Hotel in Kansas City, when he was campaigning for the U.S. presidency in 1912. Throughout her life, she was not afraid to take on any task that came her way. She always found a way to turn crises and problems into opportunities. In times of stress, she turned to her favorite book, the Meditations of Marcus Aurelius, for guidance.

Eilene was an expert story-teller, sharing with wit and a wonderful sense of humor tales of her experiences as a child, in the Great Depression, her work with powerful members of Congress, her travels around the world, and especially her work as a space law and policy analyst. She had a wonderful sense of humor. Once she arrived in Germany to begin a tour of countries before meeting a deadline in England. At the U.S. Army Office there, a colonel pulled down a large wall map of Europe and told her, “You cannot visit that many countries before your deadline,” Eilene pulled out her pocket map and said, “The reason you think I cannot do it is because you have such a large map. I have a little map, which makes it possible for me to meet my deadline.”

Dr. Galloway was preceded in death by her husband and her son David Barnes Galloway of Laguna Beach, California. She is survived by her son Jonathan Fuller Galloway, a retired political science professor, of Burlington, Vermont, six grandchildren, five great-grandchildren, and numerous friends and colleagues all over the world.