Disk in the Active Galactic Nuclei observed by HALCA

The radio astronomy satellite HALCA is maintaining its space observations under the VLBI Space Observatory Program (VSOP), in cooperation with the global tracking network and the radio astronomical antenna network. Though the operation is slightly limited at present, because of a malfunction in one of HALCA’s four reaction wheels a year ago, there is no serious problem in normal observation.

While VSOP spends most of its time observing jet phenomenon in Active Galactic Nuclei, we sometimes detect a disk perpendicular to the jet during observation. This is detectable in the radio galaxy NGC4261 that is about 130 million light-years distant. In this radio galaxy, there is long, massive radio jet that penetrates the center of the galaxy.

The Hubble Space Telescope (HST) has discovered a bright disk measuring about 1,000 light-years in diameter, whose axis matches that of the jet in the radio galaxy. With recent ground-based VLBI observations, the root of the jet has been observed with approximately one light-year resolution, which resulted in the discovery that the brightly glowing root is asymmetrical at the front and back of the core along the jet axis.

By observing radio galaxy NGC4261, VSOP observations produced persuasive results. The absorption by the disk that encircles the core can be clearly seen. The width of the disk is less than one light-year and 1/1,000th smaller in scale than that observed by HST. Because VSOP enables us to observe at relatively long wavelengths of 18cm and 6cm, the absorption by the disk (absorption of low-frequency electric waves by plasma) can be sensitively observed. 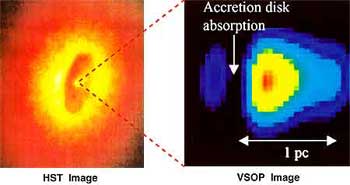 The optical disk (Hubble Space Telescope) of radio galaxy NGC4261
central nuclei and a VSOP wavelength image. The jet axis and
disk-rotation axis face from left to right in the illustration.