Discovery of A Vigorous Star-Forming Galaxy at Cosmic Dawn 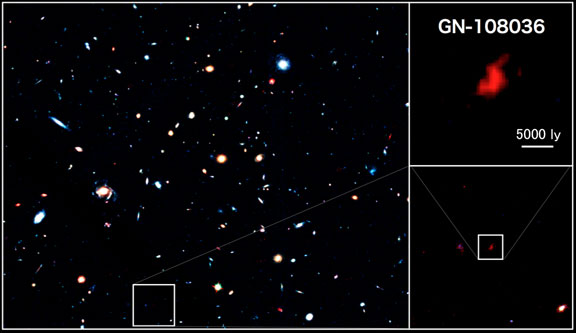 An international team of astronomers led by Masami Ouchi at the University of Tokyo has discovered a vigorous, star-forming galaxy that existed about 750 million years after the Big Bang. This galaxy, named GN-108036, was a remarkable source of star formation at the so-called “cosmic dawn”, a very early time in cosmic history; it was generating an exceptionally large amount of stars in the calm, dark cosmos.

The team obtained the spectra of GN-108036 and calculated its distance from Earth to confirm that it is one of the most distant galaxies ever discovered. A review of archival images revealed the occurrence of remarkably energetic star formation within it; a large mass of gas, equivalent to about a hundred Suns per year, was forming stars. Although nine galaxies from about 600 to 800 million years after the Big Bang have been confirmed to date, GN-108036 was forming stars much more vigorously than the other galaxies. Team leader Ouchi commented, “A number of galaxies were actively forming stars long after the Big Bang, and some of them were comparable to or even more active than GN-108036. The significant finding about GN-108036 is that it demonstrates the existence of a vigorous star-forming galaxy when the universe was still very cold and dark.”

An extensive survey of the Great Observatories Origins Deep Survey (GOODS) northern field by the Subaru Prime Focus Camera (Suprime-Cam) led to the initial discovery of GN-108036. To determine the distance to the galaxy, the astronomers observed it with the Keck Observatory’s highly sensitive Deep Imaging Multi-Object Spectrograph (DEIMOS). Data reduction showed a Lyman-alpha line, which indicates bright hydrogen emissions in the ultraviolet part of the spectrum. Attenuation of neutral hydrogen in the intergalactic medium caused its expected asymmetry.

Yoshiaki Ono at the University of Tokyo, a team member and the leading author of the article, commented on the team’s careful efforts to obtain a reliable spectrum: “We went back and repeated our observations on three different occasions over two years. We observed the feature at the same wavelength on each occasion. The asymmetric line provided undisputed evidence for the huge distance to the galaxy.” The astronomers searched for a sign of detection by using recent observations of the GOODS field with the Hubble Space Telescope’s newly-installed camera, WFC3. They confirmed the robust detection of GN-108036 in the WFC3 image; the galaxy’s intense brightness in the intrinsic ultraviolet indicated that it contained many young, massive stars.

The team gathered images of the galaxy obtained with the Subaru Telescope’s near-infrared camera MOIRCS (Multi-Object Infrared Camera and Spectrograph) and the Spitzer Space Telescope’s infrared camera IRAC (Infrared Array Camera); they found that the galaxy was harboring surprisingly powerful star-formation. “The amount of stars born every year was more than ten times higher than those in the other galaxies at a comparable distance,” explained Ono. “We’re surprised to know that such a vigorous galaxy existed at a time when the universe was only five percent of its present age.”

Interestingly, several teams of astronomers have reported discoveries of compact and massive old galaxies around four billion years after the Big Bang. How they formed remains a mystery. Small, actively star-forming galaxies like GN-108036 might be the ancestors of such galaxies. Detailed investigations of the nature of GN-108036 will provide us with an important key for understanding the early phases of the formation and evolution of galaxies.

This research will be published in the January 10, 2012, issue of The Astrophysical Journal. The research is based in part on data collected at the Subaru Telescope, which is operated by the National Astronomical Observatory of Japan; the W.M. Keck Observatory, which is operated as a scientific partnership among the California Institute of Technology, the University of California, and the National Aeronautics and Space Administration (NASA); the Hubble Space Telescope, managed by NASA and the European Space Agency (ESA); and the Spitzer Space Telescope, managed by the Jet Propulsion Laboratory (JPL) for NASA.

Authors of the paper:

Figure 1: GN-108036, the most vigorous, star-forming galaxy ever discovered during the cosmic dawn, appears as a faint red object in the false-color images taken with the Hubble Space Telescope (0.78 microns for blue, 0.85 microns for green, 1.4 microns for red). Spectroscopy revealed that the galaxy is about 12.9 billion light-years away from Earth, a distance that establishes it as one of the farthest galaxies ever confirmed. Cosmic expansion explains the red color of the galaxy’s light, which was actually emitted in ultraviolet (UV) wavelengths. The intense brightness of the intrinsic UV light suggests that the galaxy contained a large number of young, massive stars. The shape of the galaxy appears elongated; its average diameter is about 5,000 light-years, comparable to the thick horizontal bar (lower right corner in the top-right panel) that shows a size of 5,000 light-years.

Figure 2: One-dimensional spectrum of GN-108036 obtained with the spectrograph DEIMOS on the Keck Telescope. The red arrow points to the detected, asymmetric Lyman-alpha line, which strongly supports the conclusion that the galaxy was in the ancient universe. The grey shaded area covers the wavelength range heavily contaminated by night-sky OH emission lines.