By SpaceRef Editor
May 13, 2015
Filed under Arianespace, Commerce, Europe 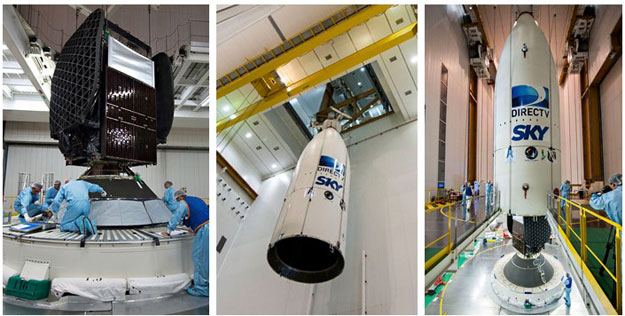 Arianespace’s upcoming mission to orbit two direct-to-home broadcast satellites from the Spaceport in French Guiana has made an important step closer to this month’s liftoff with the integration of DirecTV-15 and SKY México-1 on their heavy-lift Ariane 5 launcher.

During action in the upper levels of the Spaceport’s Final Assembly Building, SKY México-1 was installed atop Ariane 5’s central core – over which was positioned the “upper composite” containing DirecTV-15, the SYLDA 5 dispenser system and the protective payload fairing.

Following final checkout, the Ariane 5 will be readied for rollout to the ELA-3 launch complex, enabling the May 27 liftoff.

As the mission’s upper passenger, DirecTV-15 is to be released first during the flight sequence, followed by the SYLDA 5 dispenser’s separation and deployment of SKY México-1.

DirecTV-15 was produced by Airbus Defence and Space using the Eurostar E3000 platform, and it will provide services in the Ku-, Ka- and R-bands for the more than 20 million customers of U.S.-based DIRECTV – one of the world’s leading providers of digital television entertainment services.

SKY México-1 is an Orbital ATK, Inc.-built satellite based the GEOStar-2™ platform and carries Ku- and R-band transponders. This spacecraft will be operated for SKY, which is owned by Mexico’s Grupo Televisa S.A.B. and DIRECTV.