By SpaceRef Editor
July 9, 2009
Filed under Astrophysics, University of Melbourne, US

Galileo knew he had discovered a new planet in 1613, 234 years before its official discovery date, according to a new theory by a University of Melbourne physicist.

Professor David Jamieson, Head of the School of Physics, is investigating the notebooks of Galileo from 400 years ago and believes that buried in the notations is the evidence that he discovered a new planet that we now know as Neptune.

A hypothesis of how to look for this evidence has been published in the journal Australian Physics and was presented at the first lecture in the 2009 July Lectures in Physics program at the University of Melbourne last week.

If correct, the discovery would be the first new planet identified by humanity since deep antiquity.

Galileo was observing the moons of Jupiter in the years 1612 and 1613 and recorded his observations in his notebooks. Over several nights he also recorded the position of a nearby star which does not appear in any modern star catalogue.

“It has been known for several decades that this unknown star was actually the planet Neptune. Computer simulations show the precision of his observations revealing that Neptune would have looked just like a faint star almost exactly where Galileo observed it,” Professor Jamieson says. 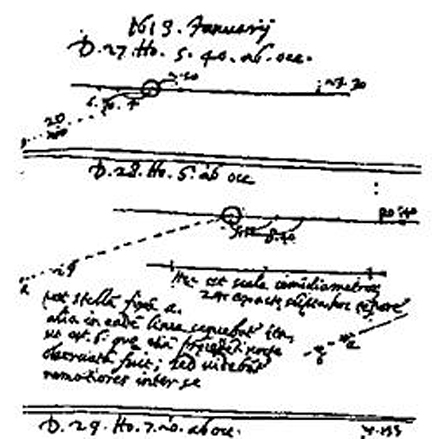 But a planet is different to a star because planets orbit the Sun and move through the sky relative to the stars. It is remarkable that on the night of January 28 in 1613 Galileo noted that the “star” we now know is the planet Neptune appeared to have moved relative to an actual nearby star.”

There is also a mysterious unlabeled black dot in his earlier observations of January 6, 1613, which is in the right position to be Neptune.

“I believe this dot could reveal he went back in his notes to record where he saw Neptune earlier when it was even closer to Jupiter but had not previously attracted his attention because of its unremarkable star-like appearance.”

If the mysterious black dot on January 6 was actually recorded on January 28, Professor Jamieson proposes this would prove that Galileo believed he may have discovered a new planet.

By using the expertise of trace element analysts from the University of Florence, who have previously analyzed inks in Galileo’s manuscripts, dating the unlabelled dot in his notebook may be possible. This analysis may be conducted in October this year.

“Galileo may indeed have formed the hypothesis that he had seen a new planet which had moved right across the field of view during his observations of Jupiter over the month of January 1613,” Professor Jamieson says.

“If this is correct Galileo observed Neptune 234 years before its official discovery.”

But there could be an even more interesting possibility still buried in Galileo’s notes and letters.

“Galileo was in the habit of sending a scrambled sentence, an anagram, to his colleagues to establish his priority for the sensational discoveries he made with his new telescope. He did this when he discovered the phases of Venus and the rings of Saturn. So perhaps somewhere he wrote an as-yet undecoded anagram that reveals he knew he discovered a new planet,” Professor Jamieson speculates.

Professor Jamieson presented at the first of a series of lectures in July, aimed at giving an insight into fundamental questions in physics to celebrate the 2009 International Year of Astronomy.