On January 3, 2004, NASA’s Mars rover Spirit is scheduled to land in a
strange crater that might be an ancient martian lake bed.

December 30, 2003: On January 3, Spirit, NASA’s 400-pound rover, is
scheduled to land on what may be a dried-up lake bed on Mars. "There’s
not much doubt: this site contained a body of liquid water, at least for some
amount of time," says Jim Garvin, NASA’s Lead Scientist for Mars Exploration.

The site is Gusev Crater, a 90-mile wide hole in the ground that
probably formed three to four billion years ago when an asteroid
crashed just south of Mars’ equator. There’s a channel system
that drains into it, which probably carried liquid water, or water
and ice, into the crater. "It’s hard to imagine the landscape
looking this way unless water was somehow involved," says
Garvin.

Right now, inside the crater, researchers expect to find
sediments, which may be nearly 3,000 feet thick. These
sediments, which, researchers hope were deposited by water,
may have been covered by dust and sand that’s blown into the
crater over the past two billion years.

But if there was once water in Gusev, its signature should still be
there.

Water, of course, is important because it could signal an environment
once-friendly to life. The landscape seen from orbit is very persuasive.
But researchers can’t be certain that Gusev contained liquid water until
they examine the site up close.

"The Gusev landscape we see today could have been modified by lava, ice,
and winds," notes Garvin. "Aspects of it could have been formed by
standing water, or by intermittent floods." Spirit carries a suite of
tools that will find out.

The rover will be able to grind away the surface cover on rocks and
analyze minerals inside. It will be able to view its surroundings with
unprecedented detail and precision. It can scoot over to the most
interesting rocks it finds in order to examine them more closely.

With these tools and others, Spirit will work to find out what really
happened. 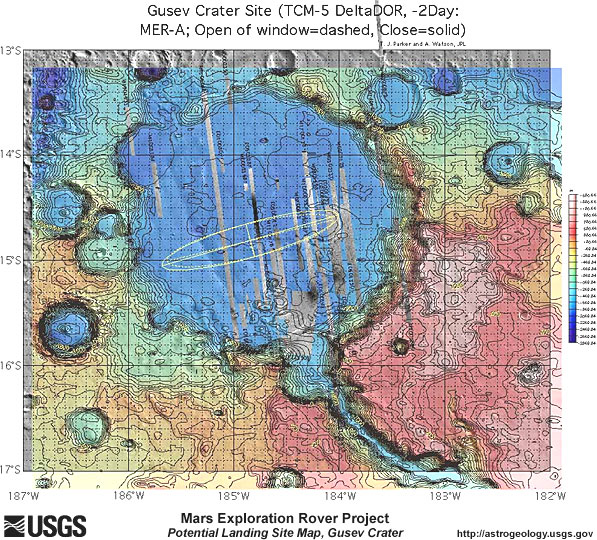 One clear sign of past water will be in the rocks.

For example, if indeed Gusev once held a giant lake ( more than 10 times
the size of the famous Crater Lake here in the US) certain key minerals
are likely to be found in its rocks. Spirit might find evaporites —
minerals formed as water dries up. Salt or gysum are familiar ones here
on Earth. Salt’s component parts — sodium and chloride — are separated,
dissolved in sea water, but as the water dries up, the sodium and chloride
join together to form the mineral "halite," for example.

On Mars, Spirit might find evaporites like gypsum, or calcium magnesian
sulfate. It might also find minerals involving carbonates (i.e., calcium
carbonate). These are sometimes, although not always, produced by or from
living organisms. But they are almost always a sign of water–"at least
here on Earth," notes Garvin.

Another sign will be in the way the sediments are organized. For example,
if the sediments were blown in by winds, the layers may be more erratic,
to reflect the changing directions of airflow (as in fossil dunes here on
Earth). If they were deposited by water, they are more likely to be layered
evenly, one on top of the other in rhythmic stacks.

The most exciting result, says Garvin, would be proving that liquid water
existed at the surface of this site for a long time. "Persistent standing
bodies of water are possible habitats for life," he explains.

But whatever information Gusev yields will be important. Water or not.
Life or not. Whatever it tells us will help determine the course of future
explorations on Mars.