Today, Deputy NASA Administrator Frederick Gregory will
render honors to the crew of the Space Shuttle Columbia at
Dover Air Force Base in Delaware. The remains of the
orbiter’s seven astronauts are scheduled to arrive in flag-
draped caskets at Dover about 2 p.m. EST on board a C-141
Starlifter.

The Charles C. Carson Center for Mortuary Affairs at the base
will prepare the remains for return to the families. Ramon’s
remains will be flown to his home in Israel for burial. Final
funeral arrangements for the crew are still to be announced.

Video and still images of the private Honor Guard reception
will be included in a NASA Television video feed later today
and available on the agency’s Internet site at www.nasa.gov. 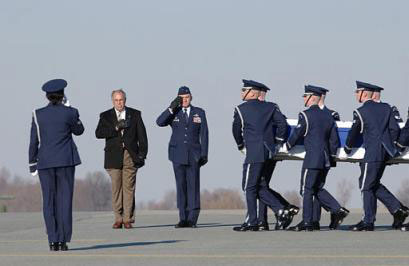