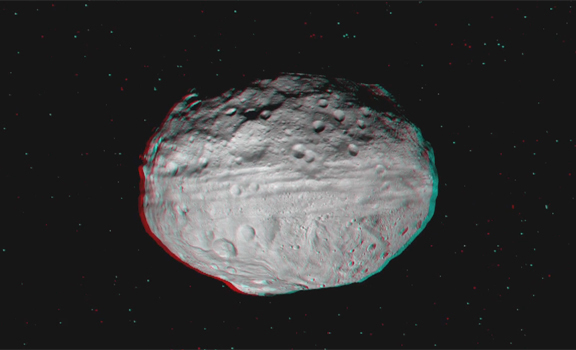 Glide over the giant asteroid Vesta with NASA’s Dawn spacecraft in a new 3-D video. Dawn has been orbiting Vesta since July 15, obtaining high-resolution images of its bumpy, cratered surface and making other scientific measurements.

Best viewed with red-blue glasses, the video incorporates images from Dawn’s framing camera from July to August 2011. It was created by Dawn team member Ralf Jaumann of the German Aerospace Center (DLR).

The images were obtained when Dawn was making its approach to Vesta, and while orbiting the giant asteroid in its first science orbit, known as survey orbit, at an altitude of about 1,700 miles (2,700 kilometers). The video begins with a global view of Vesta from the plane of its equator, where a mysterious band of linear ridges and troughs can be seen. The movie cuts to a flyover of young craters in the northern hemisphere, whose peculiar alignment has led some scientists to refer to them as the “snowman.” Then this virtual tour of Vesta takes the viewer around a massive mountain at the south pole of Vesta that is about 16 miles (25 kilometers) high, or more than twice the height of Mt. Everest.

“If you want to know what it’s like to explore a new world like Vesta, this new video gives everyone a chance to see it for themselves,” Jaumann said. “Scientists are poring over these images to learn more about how the craters, hills, grooves and troughs we see were created.”

Vesta is the second most massive object in the asteroid belt between Mars and Jupiter. Dawn is currently spiraling down to its low altitude mapping orbit, which will bring the spacecraft to about 130 miles (210 kilometers) above Vesta’s surface.

“Dawn’s data thus far have revealed the rugged topography and complex textures of the surface of Vesta, as can be seen in this video,” said Carol Raymond, deputy principal investigator at NASA’s Jet Propulsion Laboratory, Pasadena, Calif. “Soon, we’ll add other pieces of the puzzle such as the chemical composition, interior structure, and geologic age to be able to write the history of this remnant protoplanet and its place in the early solar system.”

Dawn launched in September 2007 and arrived at Vesta on July 15, 2011. Following a year at Vesta, the spacecraft will depart in July 2012 for the dwarf planet Ceres, where it will arrive in 2015.

Dawn’s mission to Vesta and Ceres is managed by JPL for NASA’s Science Mission Directorate in Washington. JPL is a division of the California Institute of Technology in Pasadena. Dawn is a project of the directorate’s Discovery Program, managed by NASA’s Marshall Space Flight Center in Huntsville, Ala. UCLA is responsible for overall Dawn mission science. Orbital Sciences Corp. in Dulles, Va., designed and built the spacecraft. The German Aerospace Center, the Max Planck Institute for Solar System Research, the Italian Space Agency and the Italian National Astrophysical Institute are international partners on the mission team.