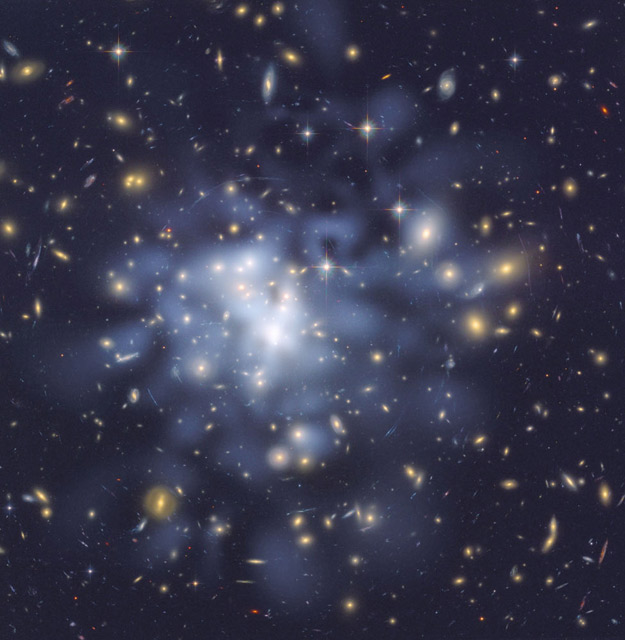 Astronomers using NASA’s Hubble Space Telescope took advantage of a giant cosmic magnifying glass to create one of the sharpest and most detailed maps of dark matter in the universe. Dark matter is an invisible and unknown substance that makes up the bulk of the universe’s mass.

The new dark matter observations may yield new insights into the role of dark energy in the universe’s early formative years. The result suggests that galaxy clusters may have formed earlier than expected, before the push of dark energy inhibited their growth. A mysterious property of space, dark energy fights against the gravitational pull of dark matter. Dark energy pushes galaxies apart from one another by stretching the space between them, thereby suppressing the formation of giant structures called galaxy clusters. One way astronomers can probe this primeval tug-of-war is through mapping the distribution of dark matter in clusters.

A team led by Dan Coe at NASA’s Jet Propulsion Laboratory in Pasadena, Calif., used Hubble’s Advanced Camera for Surveys to chart the invisible matter in the massive galaxy cluster Abell 1689, located 2.2 billion light-years away. The cluster’s gravity, the majority of which comes from dark matter, acts like a cosmic magnifying glass, bending and amplifying the light from distant galaxies behind it. This effect, called gravitational lensing, produces multiple, warped, and greatly magnified images of those galaxies, like the view in a funhouse mirror. By studying the distorted images, astronomers estimated the amount of dark matter within the cluster. If the cluster’s gravity only came from the visible galaxies, the lensing distortions would be much weaker.

Based on their higher-resolution mass map, Coe and his collaborators confirm previous results showing that the core of Abell 1689 is much denser in dark matter than expected for a cluster of its size, based on computer simulations of structure growth. Abell 1689 joins a handful of other well-studied clusters found to have similarly dense cores. The finding is surprising, because the push of dark energy early in the universe’s history would have stunted the growth of all galaxy clusters.

“Galaxy clusters, therefore, would had to have started forming billions of years earlier in order to build up to the numbers we see today,” Coe explains. “At earlier times, the universe was smaller and more densely packed with dark matter. Abell 1689 appears to have been well fed at birth by the dense matter surrounding it in the early universe. The cluster has carried this bulk with it through its adult life to appear as we observe it today.”

Abell 1689 is among the most powerful gravitational lensing clusters ever observed. Coe’s observations, combined with previous studies, yielded 135 multiple images of 42 background galaxies.

“The lensed images are like a big puzzle,” Coe says. “Here we have figured out, for the first time, a way to arrange the mass of Abell 1689 such that it lenses all of these background galaxies to their observed positions.” Coe used this information to produce a higher-resolution map of the cluster’s dark matter distribution than was possible before.

Coe teamed with mathematician Edward Fuselier, who, at the time, was at the United States Military Academy at West Point, to devise a new technique to calculate the new map. “Thanks, in large part, to Eddie’s contributions, we have finally ‘cracked the code’ of gravitational lensing. Other methods are based on making a series of guesses as to what the mass map is, and then astronomers find the one that best fits the data. Using our method, we can obtain, directly from the data, a mass map that gives a perfect fit.”

Astronomers are planning to study more clusters to confirm the possible influence of dark energy. A major Hubble program that will analyze dark matter in gigantic galaxy clusters is the Cluster Lensing and Supernova survey with Hubble (CLASH). In this survey, the telescope will study 25 clusters for a total of one month over the next three years. The CLASH clusters were selected because of their strong X-ray emission, indicating they contain large quantities of hot gas. This abundance means the clusters are extremely massive. By observing these clusters, astronomers will map the dark matter distributions and look for more conclusive evidence of early cluster formation, and possibly early dark energy.