Dancing with the Stars Takes on a Whole New Twist

Two galaxies perform an intricate dance in this new Hubble Space
Telescope image. The galaxies, containing a vast number of stars, swing
past each other in a graceful performance choreographed by gravity.

The pair, known collectively as Arp 87, is one of hundreds of
interacting and merging galaxies known in our nearby universe. Arp 87
was originally cataloged by astronomer Halton Arp in the 1960s. Arp’s Atlas of
Peculiar Galaxies is a compilation of astronomical
photographs using the Palomar 200-inch Hale and the 48-inch Samuel
Oschin telescopes.

The resolution in the Hubble image shows exquisite detail and fine
structure that was not observable when Arp 87 was first cataloged in
the 1960s.

The two main players comprising Arp 87 are NGC 3808 on the right (the
larger of the two galaxies) and its companion NGC 3808A on the left.
NGC 3808 is a nearly face-on spiral galaxy with a bright ring of star
formation and several prominent dust arms. Stars, gas, and dust flow
from NGC 3808, forming an enveloping arm around its companion.
NGC 3808A is a spiral galaxy seen edge-on and is surrounded by a
rotating ring that contains stars and interstellar gas clouds. The ring
is situated perpendicular to the plane of the host galaxy disk and is
called a “polar ring.” 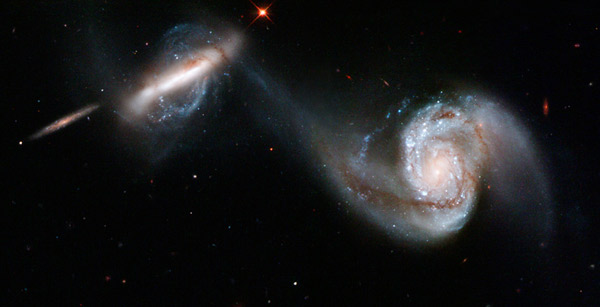 As seen in other mergers similar to Arp 87, the corkscrew shape of the
tidal material or bridge of shared matter between the two galaxies
suggests that some stars and gas drawn from the larger galaxy have been
caught in the gravitational pull of the smaller one. The shapes of both
galaxies have been distorted by their gravitational interaction with
one another.

A major aspect of this excess star formation could be properly revealed
only when Hubble turned its imaging capabilities toward colliding
galaxies. Among the observatory’s first discoveries was that galaxies
with very active star formation contain large numbers of super star
clusters – clusters more compact and richer in young stars than
astronomers were accustomed to seeing in our galactic neighborhood.

Arp 87 is in the constellation Leo, the Lion, approximately 300 million
light-years away from Earth. These observations were taken in February
2007 with the Wide Field Planetary Camera 2. Light from isolated blue,
green, red, and infrared ranges was composited together to form this
color image.