Do you know that there are countless diamonds in space? Loads of tiny diamonds, each measuring one micrometer (less than the width of a human hair) are located in the material that surrounds some stars–their circumstellar disks. Although circumstellar diamonds account for little of a disk’s weight, their combined volume would be as large as part of a moon. Nevertheless, few stars have been
identified which show clear evidence of diamonds in their disks. Why are only a small number of stars adorned by diamonds? How can we find more of them? Astronomers have been using the Subaru Telescope to seek the answers to these questions. They have learned that creating diamonds in space requires very special conditions.

When scientists look for diamonds in space, they are like detectives using fingerprints to trace a missing person. The fingerprints of diamond crystals take the form of signature lines in the infrared wavelength, outside the range of visible light. The first such signature was discovered in 1983 in the circumstellar disk of Elias 1, a young star located in the direction of Taurus (Whittet et al. 1983, A&A, 12, 01). Elias 1 is one of many Herbig Ae/Be (HAEBE) stars — young, very bright stars of intermediate mass, about 1.5-10 times as
massive as the sun.

Although extensive surveys of sixty other HAEBE stars have been conducted since then, scientists have found only three stars with such distinctive emission lines in their disks (e.g. Acke et al. 2006, A&A, 422, 612). After more than fifteen years of puzzling over the reasons for these signature lines, astronomers have concluded that diamonds are the carriers of these emissions. (Guillois et al. 1999, ApJL, 521, L133). The question remains: Why are there so few diamond-studded stars? 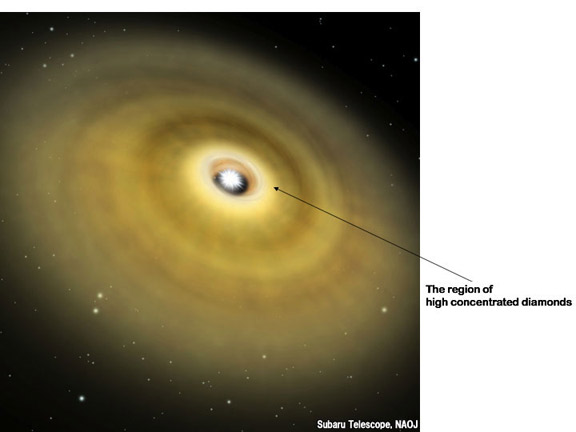 Clues for Finding Stars with Diamonds

An international team of astronomers from the Max Planck Institute for Astronomy (MPIA) in Germany, Hokkaido University in Japan, National Astronomical Observatory of Japan (NAOJ) in Hawaii, Jena University in Germany, and the University of Copenhagen in Denmark used observations from the Subaru Telescope to provide data for their interpretation of why only particular stars have diamonds. One of their major findings was that the emissions of diamond-disk stars are more centrally located and densely concentrated in the disk than other kinds of emissions. The scientists then related this finding to another intriguing feature of two of the three stars with diamonds: Large X-ray flares are observed near them. For stars of intermediate mass, like Elias 1, it is rather uncommon to have a strong X-ray emission, let alone an X-ray flare. Were these rare occurrences — diamonds and X-ray flares — linked together in some way? Clues to an answer came from comparing how diamonds are formed on earth with how they might be created in space.

Making a natural diamond on earth requires extremely high pressure and temperature, conditions that usually occur deep underground on earth. The most difficult hurdle to overcome in developing diamonds in space is its low pressure. How can we find such high pressure in the vacuum of interstellar space?

Findings from previous laboratory experiments provided the astronomers with a possible answer. In 1996, physicists in Germany found that tiny diamond particles formed at the core of “carbon onions” when they fired high-energy electron beams into a vacuum (Banhart & Ajayan 1996, Nature, 382, 433). The key to diamond formation is that the carbon onion, made up of a shell of multiple layers of carbons, works as a natural pressure container. The high-energy electrons shot into the onion knock out the carbon atoms in the shell. With fewer atoms now supporting the surface, the shell physically shrinks. As the firing of electrons continues, the shell continues to shrink. Finally, ultrahigh
pressure, thousands of times more intense than earth’s atmosphere, builds up in the center of the onion. Another laboratory experiment demonstrated that warm temperature is necessary to foster the growth of diamond particles on the surface of the carbon onion (Zaiser & Banhart 1997, Phys. Rev. Lett. 79, 3680).

Led by the MPIA, the scientific team drew parallels between the laboratory findings and what happens in interstellar space. The X-ray flares seem to come from the lighter companions to the primary stars of the binary systems, where two stars are consistently associated with each other. Particle acceleration always accompanies the X-ray flare, as these two come from the same energetic phenomena related to stellar magnetic activity. These conditions could result in a carbon onion in space, with the necessary high pressure to create diamonds.

The Circumstellar Disk Is the Treasure Chest

The clues from previous laboratory research and stellar observations have led the international team of scientists to speculate about how we can discover this treasure of diamonds in space. We know that diamonds are formed close to the star and are not of interstellar origin. Also, diamond stars must have special ingredients: a disk, a hot central star and a companion emitting hard X-rays. The star must be of intermediate mass that can warm up the disk to a medium temperature. Then, carbon onions can form, providing the cradle for
diamond creation. The need for such special conditions would explain why we see so few stars with diamond signatures in their disks.

The findings of this research will raise even more questions and speculation about the formation of these fascinating crystals. It’s possible that there are tons of diamonds that we cannot yet see because their emission features are shielded by onion shells. Thanks to the data collected from observations with the Subaru Telescope as well as the international team’s intriguing interpretation of their findings, we now have more definite steps for discovering the circumstellar treasure chests with diamonds in space.