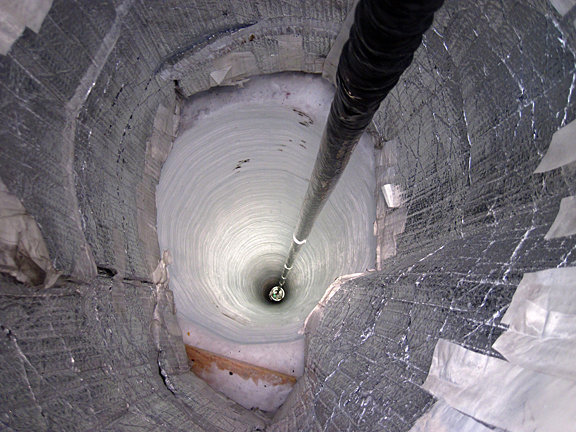 Antarctica’s IceCube is among the most ambitious scientific construction projects ever attempted. Culminating a decade of planning, innovation and testing, construction of the world’s largest neutrino observatory, installed in the ice of the Antarctic plateau at the geographic South Pole, was successfully completed December 18, 2010, New Zealand time.

The last of 86 holes had been drilled and a total of 5,160 optical sensors are now installed to form the main detector–a cubic kilometer of instrumented ice–of the IceCube Neutrino Observatory, located at the National Science Foundation’s Amundsen-Scott South Pole Station.

From its vantage point at the end of the world, IceCube provides an innovative means to investigate the properties of fundamental particles that originate in some of the most spectacular phenomena in the universe.

In the deep, dark, stillness of the Antarctic ice, IceCube records the rare collisions of neutrinos–elusive sub-atomic particles–with the atomic nuclei of the water molecules of the ice. Some neutrinos come from the sun, while others come from cosmic rays interacting with the Earth’s atmosphere and dramatic astronomical sources such as exploding stars in the Milky Way and other distant galaxies. Trillions of neutrinos stream through the human body at any given moment, but they rarely interact with regular matter, and researchers want to know more about them and where they come from.

The size of the observatory is important because it increases the number of potential collisions that can be observed, making neutrino astrophysics a reality.

The completion of construction brings to a culmination one of the most ambitious and complex multinational scientific projects ever attempted. The National Science Foundation (NSF) contributed $242 million toward the total project cost of $279 million. NSF is the manager of the United States Antarctic Program, which coordinates all U.S. research on the southernmost continent.

The University of Wisconsin-Madison, as the lead U.S. institution for the project, was funded by NSF to manage and coordinate the work needed to design and build the complex and often unique components and software for the project.

The university designed and built the Enhanced Hot Water Drill, which was assembled at the physical sciences lab in Stoughton, Wisconsin. The 4.8- megawatt hot-water drill is a unique machine that can penetrate more than two kilometers into the ice in less than two days.

After the hot water drill bores cleanly through the ice sheet, deployment specialists attach optical sensors to cable strings and lower them to depths between 1,450 and 2,450 meters. The ice itself at these depths is very dark and optically ultratransparent.

Each string has 60 sensors at depth and the 86 strings make up the main IceCube Detector. In addition, four more sensors sit on the top of the ice above each string, forming the IceTop array. The IceTop array combined with the IceCube detector form the IceCube Observatory, whose sensors record the neutrino interactions.

The successful completion of the observatory is also a milestone for international scientific cooperation on the southernmost continent. In addition to researchers at universities and research labs in the U.S., Belgium, Germany and Sweden–the countries that funded the observatory–IceCube data are analyzed by the larger IceCube Collaboration, which also includes researchers from Barbados, Canada, Japan, New Zealand, Switzerland and the United Kingdom.

“IceCube is not only a magnificent observatory for fundamental astrophysical research, it is the kind of ambitious science that can only be attempted through the cooperation–the science diplomacy, if you will–of many nations working together in the finest traditions of Antarctic science toward a single goal,” said Karl A. Erb, director of NSF’s Office of Polar Programs.

“To complete such an ambitious project, both on schedule and within budget, is a tribute to the fine work of the University of Wisconsin-Madison and its partner institutions, but it’s also a reflection of the excellence of the personnel and infrastructure of the U.S. Antarctic Program,” he added. “Science like IceCube is done in Antarctica because it is a unique global laboratory. I am very gratified that the U.S. Antarctic Program is equal to the challenge of supporting such a project.”

IceCube is among the most ambitious and complex scientific construction projects ever attempted.

To build the observatory, all project personnel, equipment, food, and detector components had to be transported to Antarctica from various places around the globe. Everything then had to be flown in ski-equipped C-130 cargo aircraft from McMurdo Station near the Antarctic coast to the South Pole, more than 800 air miles away.

Working only during the relatively warm and short Antarctic summer–from November through February, when the sun shines 24 hours a day–drill and deployment teams worked in shifts to maximize their short time on the ice each year.

An international team of scientists, engineers and computer specialists have been working on development and construction of the detector since November 1999, when the first proposal was submitted to NSF and partners in Belgium, Germany and Sweden.

In the 1950’s, Nobelist in physics Frederick Reines and other particle physicists realized that neutrinos could be used as astronomical messengers. Unlike light, neutrinos pass through most matter, making them a unique probe into the most violent processes in the universe involving neutron stars and black holes. The neutrinos IceCube studies have energies far exceeding those produced by manmade accelerators.

Unlike many large-scale science projects, IceCube began recording data before construction was complete. Each year since 2005 following the first deployment season, the new configuration of sensor strings began taking data. Each year as the detector grew, more and better data made its way from the South Pole to the data warehouses in the University of Wisconsin and around the world.

“Even in this challenging phase of the project, we published results on the search for dark matter and found intriguing patterns in the arrival directions of cosmic rays. Already, IceCube has extended the measurements of the atmospheric neutrino beam to energies in excess of 100 TeV,” said Francis Halzen, principal investigator for the project. “With the completion of IceCube, we are on our way to reaching a level of sensitivity that may allow us to see neutrinos from sources beyond the sun.”

Funding agencies outside of the U.S. that contributed to the construction of the IceCube Observatory are: