New ‘ring of life’ points to mergers and acquisitions between cells

ARLINGTON, Va.– According to a new report, complex cells like those in the human body probably resulted from the fusion of genomes from an ancient bacterium and a simpler microbe, Archaea, best known for its ability to withstand extreme temperatures and hostile environments. The finding provides strong evidence that complex cells arose from combinations of simpler organisms in a symbiotic effort to survive.

Jim Lake and Maria Rivera, at the University of California-Los Angeles (UCLA), report their finding in the Sept. 9 issue of the journal Nature.

Scientists refer to both bacteria and Archaea as “prokaryotes”–a cell type that has no distinct nucleus to contain the genetic material, DNA, and few other specialized components. More-complex cells, known as “eukaryotes,” contain a well-defined nucleus as well as compartmentalized “organelles” that carry out metabolism and transport molecules throughout the cell. Yeast cells are some of the most-primitive eukaryotes, whereas the highly specialized cells of human beings and other mammals are among the most complex.

“A major unsolved question in biology has been where eukaryotes came from, where we came from,” Lake said. “The answer is that we have two parents, and we now know who those parents were.”

Further, he added, the results provide a new picture of evolutionary pathways. “At least 2 billion years ago, ancestors of these two diverse prokaryotic groups fused their genomes to form the first eukaryote, and in the processes two different branches of the tree of life were fused to form the ring of life,” Lake said.

The work is part of an effort supported by the National Science Foundation–the federal agency that supports research and education across all disciplines of science and engineering–to re-examine historical schemes for classifying Earth’s living creatures, a process that was once based on easily observable traits. Microbes, plants or animals were said to be related if they shared certain, mostly physical, characteristics. DNA technology now allows much closer scrutiny of hereditary molecules, which provides a more accurate and detailed picture of the genetic relationships between and among living things. 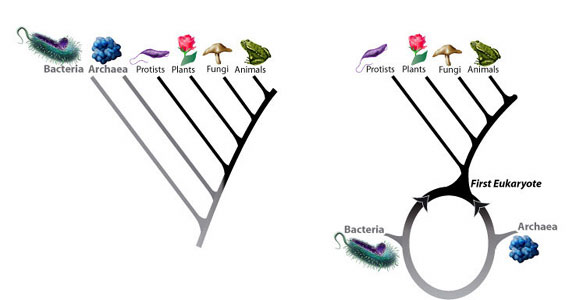 “New computational tools and comparative analyses will undoubtedly find instances in which the evolutionary record will need to be set straight,” said James Rodman, a program officer in NSF directorate for biology, which funded the research. “This new fellowship among microbiologists, evolutionists, and computationalists will provide a much fuller picture of the relatedness of living things.”

Lake and Rivera analyzed and compared the genomes of 30 microorganisms selected from the three categories (eukaryotes, bacteria and Archaea). All of the microbes contained about the same number of genes. The researchers then used the computer to produce genome combinations that reflected the most likely ancestors of modern eukaryotes. Their analysis, they say, showed that two ancient prokaryotes–one most similar to a bacterium, and one an Archaea–combined genomes out of a mutually advantageous need to survive.

That theory, known as endosymbiosis, has been a popular explanation of how eukaryotic cells acquired smaller components to carry out cellular processes. According to the report, modern eukaryotes obtained genes required to operate the cell from the bacterial side of the family, and the information-carrying genes from the Archaea side.

Further, the authors say, the work also sheds light on the “horizontal” transfer of genes–sideways from organism to organism, rather than from parent to offspring.

The U.S Department of Energy, the National Institutes of Health, and NASA also supported this work.