By SpaceRef Editor
May 23, 2012
Filed under ASTRON, Astrophysics, Europe, netherlands 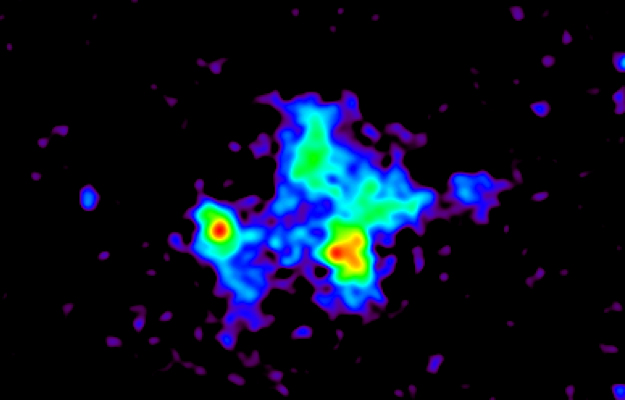 An international team of astronomers has used the International LOFAR Telescope from ASTRON, the Netherlands Institute for Radio Astronomy, to study the formation of the galaxy cluster Abell 2256. Abell 2256 is a cluster containing hundreds of galaxies at a distance of 800 million light-years. “The structure we see in the radio images made with LOFAR provides us with information about the origin of this cluster,” explains lead author Dr. Reinout van Weeren (Leiden University and ASTRON). The study will be published in the scientific journal Astronomy & Astrophysics. The research involved a large team of scientists from 26 different universities and research institutes.

LOFAR has made the first images of Abell 2256 in the frequency range of 20 to 60 MHz. What came as a surprise to scientists was that the cluster of galaxies was brighter and more complex than expected. Dr. van Weeren: “We think that galaxy clusters form by mergers and collisions of smaller clusters.” Abell 2256 is a prime example of a cluster that is currently undergoing a collision. The radio emission is produced by tiny elementary particles that move nearly at the speed of light. With LOFAR it is possible to study how these particles get accelerated to such speeds. “In particular, we will learn how this acceleration takes place in regions measuring more than 10 million light-years across,” says Dr. Gianfranco Brunetti from IRA-INAF in Bologna, Italy, who together with Prof. Marcus Brueggen from the Jacobs University in Bremen, coordinates the LOFAR work on galaxy clusters.

LOFAR was built by a large international consortium led by the Netherlands and which includes Germany, France, the United Kingdom and Sweden. One of the main goals of LOFAR is to survey the entire northern sky at low radio frequencies, with a sensitivity and resolution about 100 times better than what has been previously done. Scientists believe that this survey will discover more than 100 million objects in the distant universe. “Soon we will start our systematic surveys of the sky that will lead to great discoveries,” says Prof. Huub Roettgering from Leiden University and Principal Investigator of the LOFAR Survey Key Project.