Astronomers using the National Science Foundation’s giant Robert C. Byrd
Green Bank Telescope (GBT) have discovered a frigid reservoir of simple
sugar molecules in a cloud of gas and dust some 26,000 light-years away,
near the center of our Milky Way Galaxy. The discovery suggests
how the molecular building blocks necessary for the creation of life could
first form in interstellar space.

The astronomers detected the 8-atom sugar molecule glycolaldehyde in a
gas-and-dust cloud called Sagittarius B2. Such clouds, often many
light-years across, are the raw material from which new stars and planets
are formed. The astronomers detected the same molecule in a warmer part of
that cloud in 2000, but the new detection shows that the sugar exists at an
extremely low temperature — only 8 degrees above absolute zero, the
temperature at which all molecular motion stops. The cold glycolaldehyde
detections were surprisingly strong when compared to the original
detections and indicate that a considerable quantity of this simple
interstellar sugar exists at extremely low temperatures.

Glycoaldehyde is composed of 2 carbon atoms, 2 oxygen atoms and 4
hydrogen atoms and is called a 2-carbon sugar. Glycolaldehyde can react
with a 3-carbon sugar to produce a 5-carbon sugar called ribose. Ribose
molecules form the backbone structure of the molecules DNA and RNA,
which carry the genetic code of living organisms.

On Earth, most chemical reactions occur in liquid water. Conditions are
quite different in interstellar space, and most of the complex molecules
appear to form on or under the surfaces of tiny dust grains. In this
scenario, smaller molecules such as water, formaldehyde, methane, ammonia,
carbon dioxide, or methanol, coat the surfaces and interiors of dust grains
in the clouds. When a shock wave, caused by the infall or outflow of
material in the star-formation process, hits the dust grains, it provides
the energy to assemble more-complex molecules from the simpler ones, and
also to free the newly-formed molecules from the dust grains. Once the
shock has passed, the molecules cool into a cold, thin gas.

Although the chemistry on Earth and in interstellar clouds is much
different, the results can be very similar. This and other recent studies
show that prebiotic chemistry — the formation of the molecular building
blocks necessary for the creation of life — occurs in interstellar
clouds long before that cloud collapses to form a new solar system with
planets. “Many of the interstellar molecules discovered to date are the
same kinds detected in laboratory experiments specifically designed to
synthesize prebiotic molecules. This fact suggests a universal prebiotic
chemistry,” said Jan M. Hollis of NASA’s Goddard Space Flight Center in
Greenbelt, MD. This suggests that the molecular building blocks for the
creation of life on a new planet might get a head start in the dust of
interstellar clouds.

The actual formation of a planetary system is such a hot process that any
prebiotic molecules would likely be destroyed. However, this study has
shown that such molecules may form in very cold regions following the
passage of a shock wave. Such conditions might be typical of the outer
regions of a young solar system following the star-formation process. A
repository of prebiotic molecules might exist in these outer regions, which
is also where comets are formed, the scientists said. It has long
been suggested that a collision with a comet or an encounter with the
passing tail of a comet might “seed” a young planet with prebiotic material.

Hollis worked with Philip Jewell of the National Radio Astronomy
Observatory in Green Bank, WV, Frank Lovas of the National Institute of
Standards and Technology in Gaithersburg, MD, and Anthony Remijan of NASA’s
Goddard Space Flight Center. The scientists reported their findings in the
September 20 issue of the Astrophysical Journal Letters.

The discovery of the cold glycolaldehyde was made by detecting faint radio
emission from the molecules. Molecules rotate end-for-end. When they
change from a higher rotational energy level to a lower energy level,
they emit radio waves at precise frequencies. Conversely, they can
absorb radio waves at specific frequencies and change from a lower
rotational energy level to a higher one. A set of frequencies emitted
or absorbed by a particular molecule forms a unique “fingerprint”
identifying that molecule. The cold glycolaldehyde was identified both
by emission from the molecules and by absorption of radio waves emitted
by a background source, all between 13 GHz and 22 GHz in frequency.

“The large diameter and great precision of the GBT made this discovery
possible, and also holds the promise of discovering additional new complex
interstellar molecules,” Jewell said. The GBT, dedicated in 2000, is the
world’s largest fully- steerable radio-telescope antenna. Its dish
reflector has more than 2 acres of signal-collecting area. 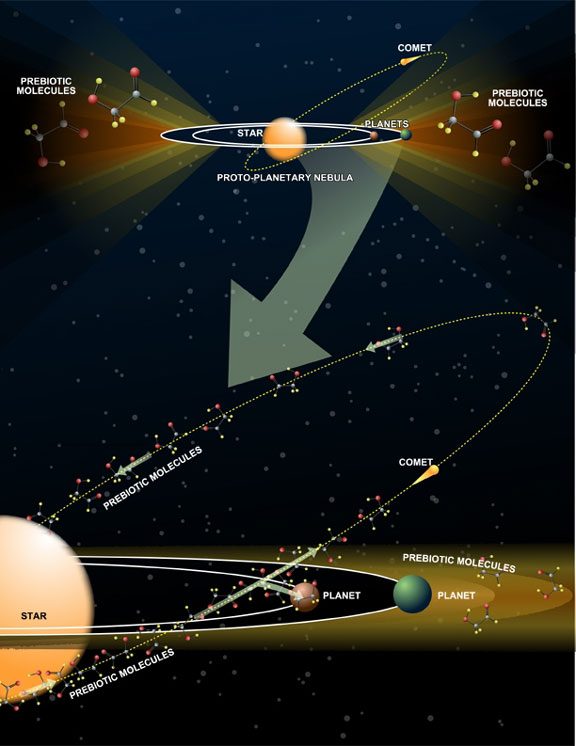 NOTE: This release, with graphics, is available on the NRAO Web
site, at: http://www.nrao.edu/pr/2004/coldsugar