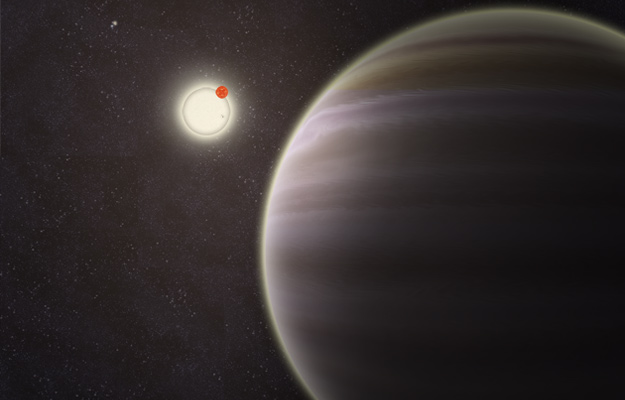 A Four-Star Planet: An artist’s illustration of PH1, a planet discovered by volunteers from the Planet Hunters citizen science project. PH1, shown in the foreground, is the first reported case of a planet orbiting a double-star that, in turn, is orbited by a second distant pair of stars. The phenomenon is called a circumbinary planet in a four-star system. Image credit: Haven Giguere/Yale

The discovery of planets continues to expand beyond the domain of professional astronomers. A joint effort of amateur astronomers and scientists has led to the first reported case of a planet orbiting a double-star that, in turn, is orbited by a second distant pair of stars.

Aided by volunteer citizen scientists using the Planethunters.org website, a Yale-led international team of astronomers identified and confirmed discovery of the phenomenon, called a circumbinary planet in a four-star system. Only six planets are known to orbit two stars but none of these are orbited by a distant binary.

Coined PH1, the planet was identified by the citizen scientists participating in Planets Hunters, a Yale-led program that enlists the public to review astronomical data from NASA’s Kepler spacecraft for signs of planets transits distant stars.

A bit larger than Neptune and thought to be a gas giant, PH1 orbits its host stars every 137 days. Beyond the planet’s orbit approximately 900 times the distance between the sun and Earth, a second pair of stars orbits the planetary system.

The research paper submitted to the Astrophysical Journal is scheduled to be presented today at the annual meeting of the Division of Planetary Sciences of the American Astronomical Society in Reno.

To read more about the discovery, visit Planethunters.org.

Ball Aerospace and Technologies Corp. in Boulder, Colo., developed the Kepler flight system and supports mission operations with the Laboratory for Atmospheric and Space Physics at the University of Colorado in Boulder.