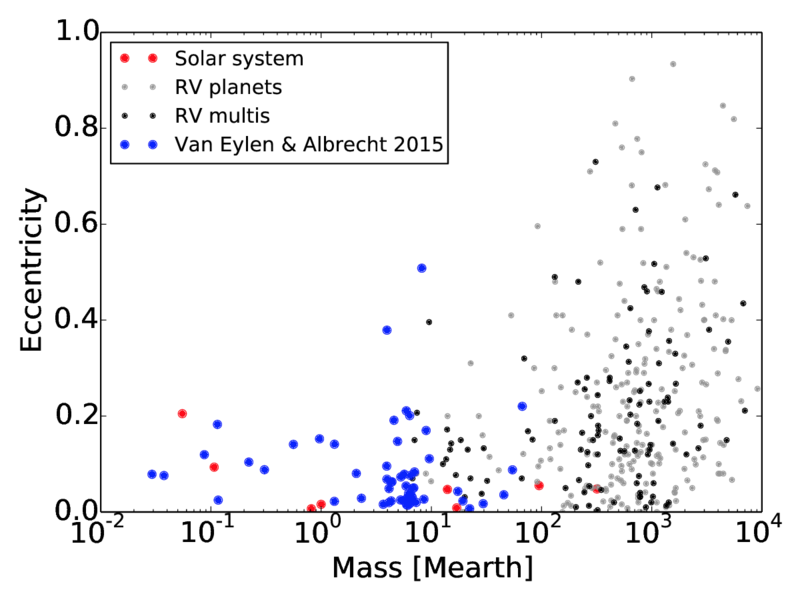 Researchers based at Aarhus University measured the orbital eccentricity of 74 small extrasolar planets and found their orbits to be close to circular, similar to the planets in the solar system, but in contrast to previous measurements of more massive exoplanets where highly eccentric orbits are commonly found. These findings have important implications for planet formation theory, as well as planet occurrence rates and habitability.

These findings are a major step that will improve understanding of the planet formation mechanisms that lead to high orbital eccentricities. “We want to understand why some exoplanets have extremely eccentric orbits, while in other cases, such as the solar system, planets orbit mostly circularly. This is one of the first times we’ve reliably measured the eccentricities of small planets, and it’s exciting to see they are different from the giant planets, but similar to the solar system,” says lead author Vincent Van Eylen.

The results are also relevant for the search for life. “None of the planets we studied are in the habitable zone, which means they are not expected to have liquid water required to support life. However, in the future, it will be interesting to see what the eccentricity is of such planets, because we know eccentricity influences the habitability of planets.” In the future, the method used can be extended to habitable planets: “We now know the method works, we just need to wait for sufficient data. The European PLATO satellite, planned for 2024, will likely help with that,” says Prof. Simon Albrecht.

The research, which was led by PhD student Vincent Van Eylen in collaboration with Prof. Simon Albrecht, made use of the duration of planetary transits. Such transits can last longer or shorter, depending on the eccentricity and orientation of an orbit. By carefully measuring the duration of planetary transits, and relating those measurements to accurate stellar properties, the eccentricities of these planets were determined to be low — similar to the planets in the solar system but in contrast to earlier measurements of more massive exoplanets. The data was taken from the Kepler satellite, a NASA space telescope which observed the same stars for four consecutive years.

Earlier measurements of exoplanet eccentricities typically made use of stellar radial velocity measurements, but such measurements were limited to massive planets. Planets with masses like Jupiter were found to commonly have eccentric orbits, in contrast to the solar system’s planets which orbits are almost circular. Using the transit duration method, Van Eylen and Albrecht were able to determine the eccentricity of planets as small as the Earth and Mercury, and unlike for the giant planets, in this case the eccentricities appear similar to the solar system.

To make these measurements, very detailed knowledge of the star was required. The authors made use of measurements made using asteroseismology, which is the study of stellar pulsations. By analyzing pulsations of stars, researchers can determine properties such as the mass, radius and density to percentage accuracies. The stellar properties are part of a separate publication which is led by Aarhus University researcher Victor Silva Aguirre.

The main author is PhD student Vincent Van Eylen, who did this work with his thesis advisor Prof. Simon Albrecht. The authors are employed at the Stellar Astrophysics Centre, University of Aarhus, Denmark, funded by the Danish National Research Foundation. Author Vincent Van Eylen is partially affiliated to the MIT Kavli Institute for Astrophysics and Space Research.