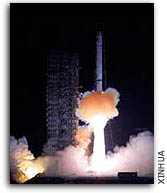 The carrier rocket blasted off at 0:02 (Beijing time) from the
Xichang Satellite Launching Center
in Sichuan Province, southwest China.

The satellite was developed and built mainly by the Research
Institute of Space Technology
under the China Space Science and Technology Group.

It will be an all-weather regional navigation system that provides
satellite-guided information round the clock for such sectors as
highway and railway transportation and seafaring.

The Beidou Navigation System, once built, will play a positive role
in promoting China’s national economic growth, said the
official, adding that today’s successful launching of the
satellite has laid a solid foundation for the establishment of the system.

This is the 63rd flight for China’s Long March series rockets and
the 21st consecutive successful launch for the country’s
space industry since October 1996.

Cao Gangchuan, a member of the Central Military Commission and
director of the General Armament Department of the
Chinese People’ s Liberation Army, observed the launching process
on site.