Using ESO’s Very Large Telescope Interferometer (VLTI) at Cerro Paranal, Chile, and the CHARA Interferometer at Mount Wilson, California, a team of French and North American astronomers has discovered envelopes around three Cepheids, including the Pole star. This is the first time that matter is found surrounding members of this important class of rare and very luminous stars whose luminosity varies in a very regular way. Cepheids play a crucial role in cosmology, being one of the first “steps” on the cosmic distance ladder.

The southern Cepheid L Carinae was observed with the VINCI and MIDI instrument at the VLTI, while Polaris (the Pole Star) and Delta Cephei (the prototype of its class) were scrutinised with FLUOR on CHARA, located on the other side of the equator. FLUOR is the prototype instrument of VINCI. Both were built by the Paris Observatory (France).

For most stars, the observations made with the interferometers follow very tightly the theoretical stellar models. However, for these three stars, a tiny deviation was detected, revealing the presence of an envelope. 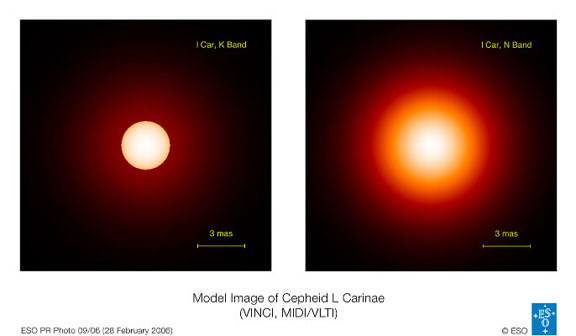 “The fact that such deviations were found for all three stars, which however have very different properties, seems to imply that envelopes surrounding Cepheids are a widespread phenomenon”, said Pierre Kervella, one of the lead authors.

The envelopes were found to be 2 to 3 times as large as the star itself. Although such stars are rather large – about fifty to several hundreds of solar radii – they are so far away that they can’t be resolved by single telescopes. Indeed, even the largest Cepheids in the sky subtend an angle of only 0.003 arc second. To observe this is similar to viewing a two-storey house on the Moon.

Astronomers have thus to rely on the interferometric technique, which combines the light of two or more distant telescopes, thereby providing the angular resolution of a unique telescope as large as the separation between them. With the VLTI, it is possible to achieve a resolution of 0.001 arc second or less.

“The physical processes that have created these envelopes are still uncertain, but, in analogy to what happens around other classes of stars, it is most probable that the environments were created by matter ejected by the star itself”, said Antoine Mérand, lead-author of the second paper describing the results.

Cepheids pulsate with periods of a few days. As a consequence, they go regularly through large amplitude oscillations that create very rapid motions of its apparent surface (the photosphere) with velocities up to 30 km/s, or 108 000 km/h! While this remains to be established, there could be a link between the pulsation, the mass loss and the formation of the envelopes.

Cepheids are commonly used as distance indicators, thanks to the existence of a basic relation between their intrinsic brightness and their pulsation period. By measuring the period of a Cepheid star, its intrinsic brightness can be deduced and from the observed apparent brightness, the distance may then be calculated. As they are intrinsically very bright stars, and can be observed in distant galaxies, this remarkable property has turned these yellow supergiant stars into primary ‘standard candles’ for extragalactic distance estimations (see ESO PR 25/04).

L Carinae is the brightest Cepheid in the sky, and also the one that presents the largest apparent angular diameter. This is a massive supergiant star, having about 10 times the mass of the Sun and a radius approximately 180 times that of the Sun. Polaris is a peculiar star as it is located very close to the North celestial pole (hence its name). It is classified as a Cepheid, but it shows very weak pulsations compared to the other stars of its class. Delta Cephei is the prototype of the Cepheids. It was discovered to be a variable star in the 18th century by the English amateur John Goodricke, and it is still one of the brightest members of the Cepheid class. Its short period is characteristic of a relatively small supergiant, with a radius of “only” 43 times that of the Sun.

These results are published in two articles to appear in Astronomy and Astrophysics:

An hi-res image is available at http://www.eso.org/outreach/press-rel/pr-2006/phot-09-06.html Science Contacts