By SpaceRef Editor
December 24, 2010
Filed under Asteroids and Comets, University of Arizona, US 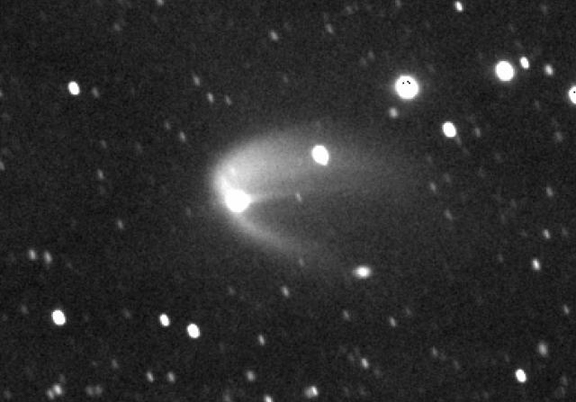 Image: This image combines thirty exposures made with the Catalina Sky Survey’s 60-inch telescope a few days after the initial discovery. It shows the outburst of (596) Scheila. (Image by Alex Gibbs and Steve Larson)

An asteroid discovered more than 100 years ago my not be an asteroid at all, but an extinct comet that is coming back to life, according to new observations.

The night of Dec. 11, Steve Larson, senior staff scientist with the Catalina Sky Survey, was searching for potentially hazardous asteroids when he came across what looked like a comet: a faint, wispy tail surrounding a bright, star-like core. Four images taken over the course of 30 minutes revealed the object was moving relative to the background stars.

“Its brightness of a total magnitude of 13.4 visual, which is about 900 times fainter than the faintest star you can see in a clear, dark sky, led me to suspect that it was a known comet, but I checked the comet database and got nothing,” Larson said.

According to Larson, comets are thought to be a major source of Earth’s water, and “extinct” comets may be useful resources for space exploration.

Further investigation revealed that the object was a known asteroid called (596) Scheila, discovered in 1906. The extraterrestrial rock is tumbling through space alongside thousands of similar objects in our solar system’s main asteroid belt, roughly between the orbits of Mars and Jupiter, out of the ecliptic plane in which most planets and asteroids travel.

Catalina Sky Survey team member Alex Gibbs checked previous images in the survey’s archives but found no activity until Dec. 3. At that time, the object appeared brighter and slightly diffuse.

Previous analysis of (596) Scheila’s color indicated that it is composed of primitive carbonaceous material left over from the formation of the solar system and might be an extinct comet.

After the discovery was announced, the astronomical community responded by pointing many of the world’s largest telescopes at the object to obtain images and spectra to determine if its tail consists of ice and gases spewing out of the body or if it is dust left behind from a collision with another asteroid. Preliminary spectra of the outburst show that the coma surrounding the asteroid is composed of dust, but more observations will be needed to understand just what is happening with (596) Scheila.

“Most asteroids are collision fragments from larger asteroids and display a range of mineral composition,” Larson explained. “But a fraction are thought to be former comets whose volatile ices have been driven off by the sun. If the activity in Scheila proves to be cometary in nature, this will be only the sixth known main-belt comet, and about 100 times larger than previously identified main belt comets.”

In 1998, Larson founded the Catalina Sky Survey, a NASA-supported project to discover and catalog Earth-approaching and potentially hazardous asteroids. It operates two telescopes in the Catalina Mountains and one in Australia and is currently discovering 70 percent of the world’s known near-Earth objects, including one that fell in northern Sudan in 2008.