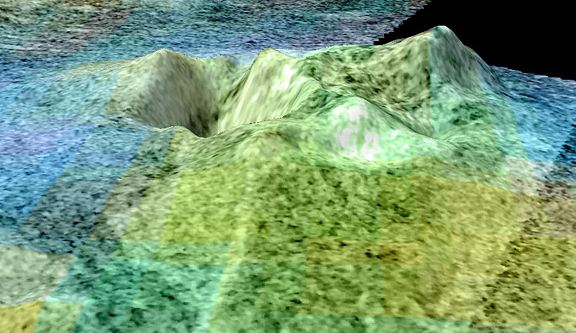 NASA’s Cassini spacecraft has found possible ice volcanoes on Saturn’s moon Titan that are similar in shape to those on Earth that spew molten rock.

Topography and surface composition data have enabled scientists to make the best case yet in the outer solar system for an Earth-like volcano landform that erupts in ice. The results were presented today at the American Geophysical Union meeting in San Francisco.

“When we look at our new 3-D map of Sotra Facula on Titan, we are struck by its resemblance to volcanoes like Mt. Etna in Italy, Laki in Iceland and even some small volcanic cones and flows near my hometown of Flagstaff,” said Randolph Kirk, who led the 3-D mapping work, and is a Cassini radar team member and geophysicist at the U.S. Geological Survey (USGS) Astrogeology Science Center in Flagstaff, Ariz.

Scientists have been debating for years whether ice volcanoes, also called cryovolcanoes, exist on ice- rich moons, and if they do, what their characteristics are. The working definition assumes some kind of subterranean geological activity warms the cold environment enough to melt part of the satellite’s interior and sends slushy ice or other materials through an opening in the surface. Volcanoes on Jupiter’s moon Io and Earth spew silicate lava.

Some cryovolcanoes bear little resemblance to terrestrial volcanoes, such as the tiger stripes at Saturn’s moon Enceladus, where long fissures spray jets of water and icy particles that leave little trace on the surface. At other sites, eruption of denser materials might build up volcanic peaks or finger-like flows. But when such flows were spotted on Titan in the past, theories explained them as non-volcanic processes, such as rivers depositing sediment. At Sotra, however, cryovolcanism is the best explanation for two peaks more than 1,000 meters (3,000 feet) high with deep volcanic craters and finger-like flows. “This is the very best evidence, by far, for volcanic topography anywhere documented on an icy satellite,” said Jeffrey Kargel, a planetary scientist at the University of Arizona, Tucson. “It’s possible the mountains are tectonic in origin, but the interpretation of cryovolcano is a much simpler, more consistent explanation.”

Kirk and colleagues analyzed new Cassini radar images. His USGS group created the topographic map and 3-D flyover images of Sotra Facula. Data from Cassini’s visual and infrared mapping spectrometer revealed the lobed flows had a composition different from the surrounding surface. Scientists have no evidence of current activity at Sotra, but they plan to monitor the area.

“Cryovolcanoes help explain the geological forces sculpting some of these exotic places in our solar system,” said Linda Spilker, Cassini project scientist at NASA’s Jet Propulsion Laboratory in Pasadena, Calif. “At Titan, for instance, they explain how methane can be continually replenished in the atmosphere when the sun is constantly breaking that molecule down.”

Cassini launched Oct. 15, 1997, and began orbiting Saturn in 2004. Saturn has more than 60 known moons, with Titan being the largest. The Cassini-Huygens mission is a cooperative project of NASA, the European Space Agency and the Italian Space Agency (ASI). JPL manages the mission for NASA’s Science Mission Directorate at the agency’s Headquarters in Washington.

The Cassini orbiter was designed, developed and assembled at JPL. The radar instrument was built by JPL and ASI, working with team members from the U.S. and several European countries. The visual and infrared mapping spectrometer was built by JPL, with a major contribution by ASI. The visual and infrared mapping spectrometer science team is based at the University of Arizona, Tucson. JPL is a division of the California Institute of Technology in Pasadena.

For more information about the Cassini mission, visit: http://www.nasa.gov/cassini