By SpaceRef Editor
December 18, 2000
Filed under University of Arizona, US 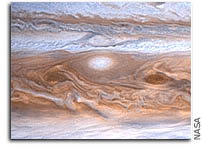 From the University of Arizona

The familiar banded appearance of Jupiter at low and mid-latitudes gradually gives way to a more mottled
appearance at high latitudes in this striking true color, contrast-enhanced, edge-sharpened frame composited
from narrow angle images taken on December 13, 2000 at 4:26 UTC (spacecraft event time). The solar
illumination on Jupiter is almost full phase: the Sun-Jupiter-spacecraft angle is less than 1 degree. The images
were captured from a distance of 19.0 million kilometers and a resolution of 114 km/pixel. The details seen in
Jupiter images have now surpassed those in even the highest resolution Hubble Space Telescope Planetary
Camera images.

The intricate structures seen in the polar region are clouds of different chemical composition, different height,
and different thicknesses. Clouds are organized by winds, and the mottled appearance in the polar regions
suggests more vortex-type motion, and winds of less vigor, at higher latitudes. The cause of this difference is
not understood. One possible contributor: the horizontal component of the Coriolis force — which arises from
the planet’s rotation and is responsible for curving the trajectories of ocean currents and winds on Earth — has
its greatest effect at high latitudes and vanishes at the equator. This tends to create small intense vortices at high
latitudes on Jupiter. Another possibility may lie in that fact that Jupiter overall emits nearly as much of its own
heat as it absorbs from the Sun, and this internal heat flux is very likely greater at the poles. This condition
could lead to enhanced convection at the poles and more vortex-type structures. Further analysis of Cassini
images, including analysis of temporal sequences, should help us understand the cause of the equator to pole
difference in cloud organization and evolution.

A striking color picture showing mottled cloud patterns near Jupiter’s north pole begins a sequence of more frequent release of Jupiter images from NASA’s Cassini spacecraft as the craft gets nearer to the planet over the next two weeks.

The picture of how cloud patterns at high latitude differ from the familiar horizontal bands around Jupiter’s middle is available from the web site of the Cassini Imaging Science team at the University of Arizona, Tucson, at

and from the website of NASA’s Jet Propulsion Laboratory, Pasadena, Calif., at

The imaging team and JPL plan to release pictures almost daily from now through Cassini’s closest approach to Jupiter, on Dec. 30. The images will likely include shots of Jupiter’s moons and rings, as well as its clouds. They will be available at the web sites given above. Cassini is already close enough to Jupiter to return higher-resolution images than possible with the planetary camera of NASA’s Earth-orbiting Hubble Space Telescope.

Cassini will use a boost from Jupiter’s gravity to reach its ultimate destination, Saturn. While near Jupiter, it is studying that planet in collaboration with NASA’s Galileo spacecraft, which has been orbiting Jupiter since Dec. 7, 1995. More information on the joint Cassini-Galileo observations is available at

Cassini is a cooperative project of NASA, the European Space Agency and the  Italian Space Agency. JPL manages the Cassini and Galileo missions for NASA’s Office of Space Science, Washington, D.C. JPL is a division of the California Institute of Technology in Pasadena.