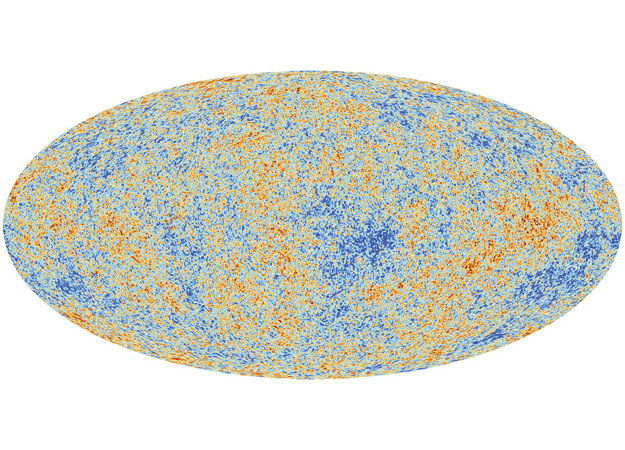 LONGUEUIL, QUEBEC–(Marketwire – Mar 21, 2013) – The Planck Space Telescope has produced by far the best map ever made of the most ancient light in the Universe, showing that it is slightly older than previously thought, expanding more slowly and that there is more matter than known before.

Canadian astronomers are members of the international team unveiling Planck”s results in Paris today. Led by the European Space Agency, the Planck Space Telescope has been surveying the sky since launched in 2009. The telescope”s incredible accuracy allows it to pinpoint faint, minute patterns–differences in light and temperature that correspond to slightly different densities in the matter left over from the Big Bang. The data being released today are from the first 15 months of the mission, and show a map of the Universe when it was just 380 000 years old.

Planck”s data confirm and refine previous models of how astronomers believe the Universe originated and evolved, but with intriguing new details. The Planck team has calculated that the Universe is 13.82 billion years old–100 million years older than earlier estimates. Planck has revealed that the Universe is expanding significantly slower than the current standard used by astronomers (known as Hubble”s Constant). The space telescope has also allowed cosmologists to confirm the Universe”s composition more accurately than ever before: normal matter, the stuff of stars and galaxies like our own Milky Way, makes up just 4.9% of the Universe. Dark matter (an invisible substance that can only be inferred through the effects its gravity cause) accounts for 26.8%. Dark energy, a mysterious force that behaves the opposite way to gravity, pushing and expanding our Universe, makes up 68.3% of the Universe–slightly less than previously thought.

“We now have a precise recipe for our Universe: how much dark and normal matter it is made of; how fast it is expanding; how lumpy it is and how that lumpiness varies with scale; and how the remnant radiation from the Big Bang is scattered,” said University of British Columbia Professor Douglas Scott. “It is astonishing that the entire Universe seems to be describable by a model using just these 6 quantities. Now, Planck has told us the values of those numbers with even higher accuracy.”

Planck”s precision has also given astrophysicists a number of new puzzles to solve. “For more than three decades, I have been trying to unveil the structure imprinted on the Universe from an epoch of accelerated expansion in its earliest moments,” said Professor J. Richard Bond of the University of Toronto. “Planck has now shown that the evidence for this early inflation is much stronger than before. The patterns we see are quite simple, resulting in many formerly viable theories falling victim to our Planckian knife. Our maps reveal unexplained, large-scale features that excite the imaginations of physicists who have been eagerly awaiting what Planck has to say about the early Universe.”

A series of scientific papers from the Planck mission will be published tomorrow covering many aspects of how the Universe is put together and how it has evolved. Planck”s instruments allow astronomers to separate the primordial light from the effects of dust and other emissions coming from our Milky Way Galaxy. “We do not simply sweep away the dust signal into the trash bin, but rather treasure it for what it tells us about the workings of the Galaxy. It enables us to discover the evolution of structure in the interstellar medium leading from a diffuse state to star formation in dense molecular clouds,” said Professor Peter Martin of the University of Toronto.

Hundreds of astronomers from around the world will continue to study Planck”s data as the telescope continues its observations. The complete results of the mission are scheduled to be released in 2014 once the space telescope has completed its study of the skies.