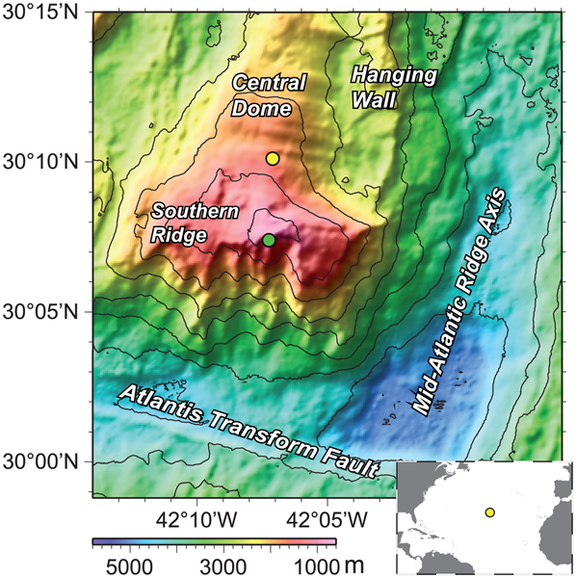 The first study to ever explore biological activity in the deepest layer of ocean crust has found bacteria with a remarkable range of capabilities, including eating hydrocarbons and natural gas, and “fixing” or storing carbon.

The research, just published in the journal PLoS One, showed that a significant number and amount of bacterial forms were present, even in temperatures near the boiling point of water.

“This is a new ecosystem that almost no one has ever explored,” said Martin Fisk, a professor in the College of Oceanic and Atmospheric Sciences at Oregon State University. “We expected some bacterial forms, but the long list of biological functions that are taking place so deep beneath the Earth is surprising.”

Oceanic crust covers about 70 percent of the surface of the Earth and its geology has been explored to some extent, but practically nothing is known about its biology – partly because it’s difficult and expensive, and partly because most researchers had assumed not all that much was going on.

The temperature of the sediments and rock increases with depth, and scientists now believe that the upper temperature at which life can exist is around 250 degrees. The ocean floor is generally composed of three levels, including a shallow layer of sediment; basalt formed from solidified magma; and an even deeper level of basalt that cooled more slowly and is called the “gabbro” layer, which forms the majority of ocean crust.

The gabbro layer doesn’t even begin until the crust is about two miles thick. But at a site in the Atlantic Ocean near an undersea mountain, the Atlantis Massif, core samples were obtained from gabbro rock formations that were closer to the surface than usual because they had been uplifted and exposed by faulting. This allowed the researchers to investigate for the first time the microbiology of these rocks.

A research expedition drilled more than 4,600 feet into this formation, into rock that was very deep and very old, and found a wide range of biological activity. Microbes were degrading hydrocarbons, some appeared to be capable of oxidizing methane, and there were genes active in the process of fixing, or converting from a gas, both nitrogen and carbon.

But it now appears that microbes in the deep ocean crust have at least a genetic potential for carbon storage, the report said. And it may lend credence to one concept for reducing carbon emissions in the atmosphere, by pumping carbon dioxide into deep subsurface layers where it might be sequestered permanently.

The researchers also noted that methane found on Mars could be derived from geological sources, and concluded that subsurface environments on Mars where methane is produced could support bacteria like those found in this study.

“These findings don’t offer any easy or simple solutions to some of the environmental issues that are of interest to us on Earth, such as greenhouse warming or oil spill pollution,” Fisk said. “However, they do indicate there’s a whole world of biological activity deep beneath the ocean that we don’t know much about, and we need to study.”

Microbial processes in this expansive subseafloor environment “have the potential to significantly influence the biogeochemistry of the ocean and the atmosphere,” the researchers wrote in their report.

The research was supported by the National Science Foundation, U.S. Department of Energy, Gordon and Betty Moore Foundation, and the Integrated Ocean Drilling Program. Collaborators were from OSU, the Lawrence Berkeley National Laboratory, Tohoku University in Japan, Universitat Bremen in Germany, University of Oklahoma, and National Institute of Advanced Industrial Science and Technology in Japan.

Editor’s Note: A digital image of the undersea Atlantis Massif is available online: http://www.flickr.com/photos/oregonstateuniversity/5189591907/ About Oregon State University: OSU is one of only two U.S. universities designated a land-, sea-, space- and sun-grant institution. OSU is also Oregon’s only university designated in the Carnegie Foundation’s top tier for research institutions, garnering more than 60 percent of the total federal and private research funding in the Oregon University System. Its nearly 24,000 students come from all 50 states and more than 90 countries. OSU programs touch every county within Oregon, and its faculty teach and conduct research on issues of national and global importance.