By SpaceRef Editor
July 29, 2010
Filed under Extrasolar, Extrasolar Planets, University of Arizona, US

Astronomers have imaged a very young brown dwarf, or failed star, in a tight orbit around a young nearby sun-like star. An international team led by University of Hawaii astronomers Beth Biller and Michael Liu with help from University of Arizona astronomer Laird Close and UA graduate students Eric Nielsen, Jared Males and Andy Skemer made the rare find using the Near-Infrared Coronagraphic Imager, or NICI, on the international 8-meter Gemini-South Telescope in Chile.

What makes this discovery special is the proximity between the 36 Jupiter-mass brown dwarf companion, dubbed PZ Tel B, and its primary star, named PZ Tel A. They are separated by only 18 Astronomical Units, or AUs, similar to the distance between Uranus and the sun.

Most young brown dwarf and planetary companions found by direct imaging are at orbital separations greater than 50 AUs – larger than the orbit of Pluto, at 40 AUs.

In addition to its small separation, in just the past year the researchers observed PZ Tel B moving quickly outward from its parent star.

An older image, taken seven years ago and reanalyzed by Laird Close, a professor at UA’s Steward Observatory and the department of astronomy, showed PZ Tel B was obscured by the glare from its parent star as recently as 2003, indicating its orbit is more elliptical than circular.

“Because PZ Tel A is a rare star being both close and very young, it had been imaged several times in the past,” said Close. “So we were quite surprised to see a new companion around what was thought to be a single star.”

Lead author and UA graduate Beth Biller said, “PZ Tel B travels on a particularly eccentric orbit – in the last 10 years, we have literally watched it careen through its inner solar system. This can best be explained by a highly eccentric, or oval-shaped, orbit.”

The host star, PZ Tel A, is a younger version of the sun, having a similar mass but a very young age of only 12 million years (about 400 times younger than the sun). In fact, the PZ Tel system is young enough to still possess significant amounts of cold circumstellar dust, which may have been sculpted by the gravitational interaction with the young brown dwarf companion. 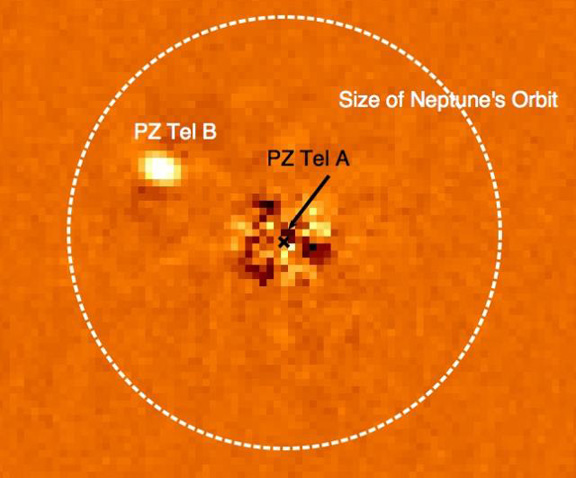 Image: The sun-like star, PZ Tel A and its brown dwarf companion, PZ Tel B. The vast majority of light from PZ Tel A has been removed from this image using specialized image analysis techniques. For size comparison, the size of Neptune’s orbit is shown; PZ Tel B is one of few brown dwarfs imaged at a distance closer than 30 Astronomical Units from its parent star. It travels around its star at a closer distance than Uranus revolves around our Sun. (Image provided by Beth Biller and the Gemini NICI Planet-Finding Campaign)

Because PZ Tel B is so close to its parent star, special techniques are necessary to distinguish the faint light of the companion from the light of the primary star. PZ Tel B is separated by 0.33 arcseconds from PZ Tel A, equivalent to a dime seen at a distance of 7 miles (11 km).
In order to take pictures so close to the star, the team used an adaptive optics system coupled to a coronagraph in order to block out excess starlight, and then applied specialized analysis techniques to the images to detect PZ Tel B and measure its orbital motion.

PZ Tel B was discovered using the Near-Infrared Coronagraphic Imager, or NICI, the most powerful high-contrast instrument designed for imaging brown dwarfs and extrasolar planets around other stars. NICI can detect companions 1 million times fainter than the host star at just 1 arcsecond separations.

An international team of researchers drawn from across the Gemini Telescope community is currently carrying out a 300-star survey with NICI, the largest high-contrast imaging survey conducted to date.
NICI campaign leader Michael Liu said: “We are just beginning to glean the many configurations of solar systems around stars like the sun. The unique capabilities of NICI provide us with a powerful tool for studying their constituents using direct imaging.”

The discovery of PZ Tel B is described in a paper being published by Astrophysical Journal Letters.
This research was supported by grants from the National Science Foundation and NASA. NICI is a facility instrument at the Gemini Observatory.