By SpaceRef Editor
August 25, 2017
Filed under University of California Santa Barbara, US 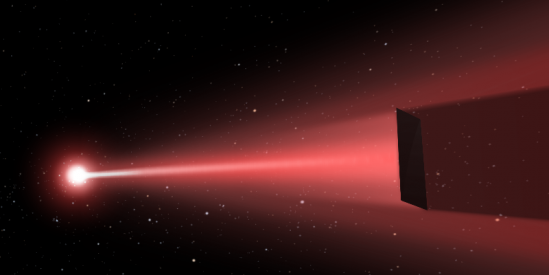 Loaded with cameras, other sensors, historical records of humanity, greetings from Earth and possibly human DNA, the smartphone-sized crafts, or interstellar arks, would be thrust on an historic journey that would take about 20 years — a blink of an eye in space travel.

“People understood roughly 100 years ago that it was possible using then-technology to send a human to the moon and return them,” Lubin said, noting that one challenge was scaling down equipment. “If you look at the popular literature at that time, the idea was treated as science fiction, like Flash Gordon.”

Lubin’s ambitious vision is showcased in “Laser-Sailing Starships,” one of eight volumes in the new series “Out of this World” published by World Book (of encyclopedia fame). Targeted to middle-school students, the books focus on research fellows involved in the NASA Innovative Advanced Concepts program. NASA aims to foster the next generation of scientific talent.

“The great part about the whole series is that it doesn’t talk down to kids, but addresses the science head-on,” said Jason Derleth, the program executive for NASA, which helps fund Lubin’s research.

In 2009, Lubin began examining how to use directed energy — a phased laser array — to deflect asteroids bound for Earth. But there was limited outside interest in the UCSB research, he said, because the planet doesn’t get hit often.

That changed dramatically in 2013. Lubin and his team had been focused on the expected near-Earth flyby of the DA14 asteroid (about 17,000 miles away). However, only hours before the asteroid was scheduled to pass the planet, Russia was struck by the Chelyabinsk meteor with the force of strategic nuclear bomb. The event directed worldwide media attention on Lubin and his team of student researchers in the Department of Physics.

“I woke up the next day and someone called to tell me Russia got hit with a meteor — I thought they were joking,” Lubin said. “At that point, things kind of went nuts. That singular event was completely coincidental — there was no relationship between the two cosmic events.”

Amid the recognition, Lubin’s concept presented in earlier research — using his asteroid-deflection technology to provide relativistic-speed propulsion for an interstellar mission — captured the attention of NASA and the United States Congress. In separate meetings with the space agency and legislators, Lubin described launching hundreds of the tiny crafts in the hope one or more reaches Proxima Centuari — a red dwarf about one-eighth the sun’s size.

“A large number of scientists have looked at the technical paper we wrote in 2015 on how to accomplish this,” Lubin said. “Except for saying this is going to be hard to do, no one has found a fatal flaw.”