By SpaceRef Editor
April 5, 2013
Filed under Boeing, Commerce, US 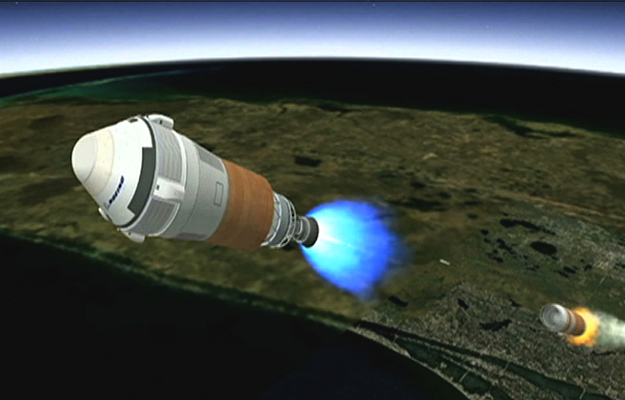 The structure that will join the Boeing [NYSE: BA] Crew Space Transportation (CST)-100 spacecraft to an Atlas V rocket has successfully completed a preliminary design review, another step toward the return of humans to space on a U.S. vehicle.

This is the third milestone under the company’s Commercial Crew Integrated Capability (CCiCap) agreement with NASA that Boeing achieved on schedule.

The structure, known as the Launch Vehicle Adapter, is being designed by United Launch Alliance (ULA), which also makes the Atlas V. Completion of this milestone means detailed engineering of the adapter can begin as progress toward the first two CST-100 test flights, as early as 2016, continues.

“This review was an outstanding integrated effort by the Boeing, ULA and NASA teams,” said John Mulholland, vice president and program manager of Boeing Commercial Crew Programs. “It sets the baseline for us to proceed to wind tunnel testing and the launch segment review in June.”

Boeing completed two additional CCiCap milestones earlier this year: the Engineering Release 2.0 software release, which lays the groundwork for spacecraft control and communications, and the Landing & Recovery Ground Systems and Ground Communications design review, which establishes a plan for the equipment and infrastructure needed for ground communications and landing and recovery operations.

Boeing’s Commercial Crew Program includes the design, manufacture, test and evaluation, and demonstration of an integrated Commercial Crew Transportation System – comprised of the CST-100 spacecraft, launch vehicle, and ground and mission operations – for NASA’s Commercial Crew Development program. The Boeing system will provide crewed flights to the International Space Station and also support the Bigelow Aerospace orbital space complex. The program is based on Boeing’s experience and innovation evolved from more than 50 years of human spaceflight and nearly 100 years of commercial aviation.

A unit of The Boeing Company, Boeing Defense, Space & Security is one of the world’s largest defense, space and security businesses specializing in innovative and capabilities-driven customer solutions, and the world’s largest and most versatile manufacturer of military aircraft. Headquartered in St. Louis, Boeing Defense, Space & Security is a $33 billion business with 59,000 employees worldwide. Follow us on Twitter: @BoeingDefense.