By SpaceRef Editor
July 7, 2004
Filed under Cassini, Saturn, UNIVERSITY OF COLORADO AT BOULDER, US

The best view ever of Saturn’s rings in the ultraviolet
indicates there is more ice toward the outer part of the rings,
hinting at ring origin and evolution, say two University of Colorado
at Boulder researchers involved in the Cassini mission.

Researchers from CU-Boulder’s Laboratory for Atmospheric and
Space Physics, Joshua Colwell and Larry Esposito, said the UV spectra
taken during the Cassini spacecraft’s orbital insertion June 30 show
definite compositional variation in the A, B and C rings.

Esposito, who discovered the F ring around Saturn in 1979
using Pioneer 11 data, is the team leader for Cassini’s Ultraviolet
Imaging Spectrograph, or UVIS, a $12.5 million instrument riding on
the spacecraft. A UVIS team member and ring expert, Colwell created
the color-enhanced images from the spectra.

The CU-Boulder built UVIS instrument is capable of resolving
the rings to show features up to 60 miles across, roughly 10 times
the resolution obtained by the Voyager 2 spacecraft. The instrument
was able to resolve the “Cassini division,” discovered by Giovanni
Domenico Cassini in the 17th century, which separates the A and B
rings of Saturn, proving the rings are not one contiguous feature.

The ring system begins from the inside out with the D, C, B
and A rings followed by the F, G and E rings. The red in both images
indicates sparser ringlets likely made of “dirty,” and possibly
smaller, particles than in the denser, icier turquoise ringlets.

A_Ring.jpg: From the inside out, the “Cassini division” in faint red
at left is followed by the A ring in its entirety. The A ring begins
with a “dirty” interior of red followed by a general pattern of more
turquoise as it spreads away from the planet, which indicates denser
material made up of ice. The red band roughly three-fourths of the
way outward in the A ring is known as the Encke gap. 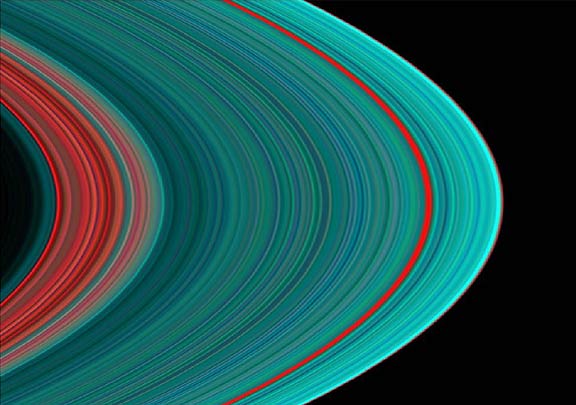 C-B_Ring.jpg: This image shows the outer C and inner B rings
respectively from left to right, with the inner B ring beginning a
little more than halfway across the image. The general pattern is
from “dirty” red particles to the denser ice shown in turquoise as
the ringlets spread outward. 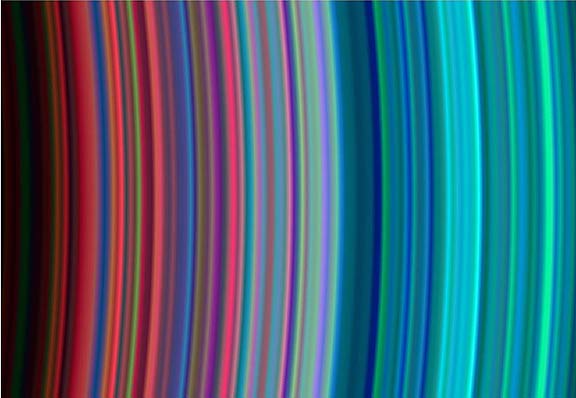