By SpaceRef Editor
March 9, 2000
Filed under University of California, Berkeley 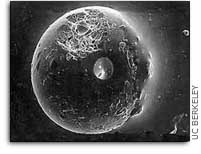 Should evolution’s "survival of the
fittest" creed be supplemented with an appendage that reads
"survival of the catastrophic?" A team of Berkeley researchers,
analyzing the history of impact cratering on the moon, has reported a
surprising increase in the frequency of impacts over the past 400 million
years that may have played a central role in the evolution of life on
Earth.

In the March 10 issue of the journal Science, researchers with
the U.S. Department of Energy’s Lawrence Berkeley National Laboratory
(Berkeley Lab) and the University of California at Berkeley (UC Berkeley),
and the Berkeley Geochronology Center (BGC) announced the discovery that
impact cratering on the moon (and, by inference, on the earth) suddenly
increased about 400 million years ago.

"From our point of view, thatís in the recent past," says
Timothy Culler, a UC Berkeley graduate student who is earning his Ph.D. on
the project. Culler is one of the co-authors of the paper in Science,
along with Richard Muller, who holds joint appointments with Berkeley
Lab’s Physics Division and UC Berkeley’s Physics Department; Paul Renne, a
UC Berkeley geologist and director of the BGC, an independent non-profit
research institution; and Timothy Becker, BGC laboratory manager and
expert in radiometric measurements.

The data published by this team show that the impact cratering rate had
dropped steadily until the unexpected rise when the impact rate returned
to the same levels as 3.5 billion years ago. The sudden increase coincides
with the "Cambrian explosion," a period in which life on Earth
took off with a dramatic burst in the number and diversity of species.

"Although most people assume that impacts cause death and
destruction, it is possible that the additional stress of the impacts
forced life to become more diverse and flexible," says Muller.
"Just as we stress trees, through pruning, to make them give more
fruit, the stress cause by catastrophic impacts may have forced evolution
into new directions."

Noting that the earliest records of life on earth date from the period
approximately 3.5 billion years ago, when their results show the intensity
of impacts was decreasing, Renne says: "Maybe, as others have
speculated before, life began on Earth many times, but the comets only
stopped wiping it out about three or four billion years ago."

Muller originally suggested the dating of lunar spherules as a way of
getting evidence for or against the existence of comet showers, brief
periods when the number of comets in the sky increases, raising the risk
that several of them are likely to hit the Earth at similar times.

Dating the chronology of impact craters on earth is difficult because
of erosion, sedimentation, and plate tectonics. Although lunar craters are
preserved in a near pristine state, it was presumed that a sample would
have to be collected from each individual crater in order to date it,
requiring an expensive re-visit to the Moon.

Muller contended that the required data could be found in any gram of
lunar soil, including those brought back by the Apollo missions. The
impact record would be preserved in spherules — microscopic glass beads
formed when droplets of molten basalt splashed out of a crater by the heat
and force of an impact subsequently cooled and hardened.

The Berkeley team obtained from NASA a gram of lunar soil inside of
which they found 155 spherules. The age of each of these tiny spherules
was determined at the BGC with an ultrasensitive technique based on the
ratios between two argon isotopes. From the ratio of argon-40 to argon-39
as measured by neutron irradiation followed by laser-driven mass
spectroscopy, the age of the spherules could be determined.

These 155 lunar spherules ranged in size from less than 100 microns to
more than 250 microns and came from lunar soil picked up in 1971 by the
Apollo-14 mission crew near Mare Imbrium (Sea of Rains), the dark crater
that dominates the moon’s face. Statistical and chemical analyses showed
that the spherules studied came from approximately 146 different craters.

"Even though we donít know which crater was the source of each
spherule, the distribution of the ages of the spherules from a single
lunar site should reflect the age distribution of craters on the
Moon," Muller said.

The results of this study not only carry implications for the evolution
of life on Earth but also for our understanding of the solar system.

Explains Muller, "It is not difficult to understand the slow
decrease. It corresponds to a gradual cleansing of the solar system by
Jupiter, the Sun, and passing stars. But it is difficult to conceive of a
mechanism that could trigger an increase, particularly one that lasted 400
million years."

Muller suggests that the sudden increase offers indirect evidence for a
companion star to the sun. When the existence of such a star was
postulated in 1984, Muller suggested that it be called Nemesis after the
Greek goddess of retribution.

"The increase in impacts could be due to a sudden change in the
orbit of Nemesis," Muller says. "If a passing star perturbed
Nemesis into a more eccentric orbit, that would account for the increase
in impacts."

Berkeley Lab is a U.S. Department of Energy National Laboratory located
in Berkeley, California. It conducts unclassified scientific research and
is managed by the University of California.

Richard Muller has joint appointments with
Berkeley Lab’s Physics Division and UC Berkeley’s Physics
Department.  He can be reached at (510) 486-7430 or via e-mail
at: ramuller@lbl.gov