By SpaceRef Editor
July 9, 2012
Filed under Alcatel-Lucent, Commerce, US 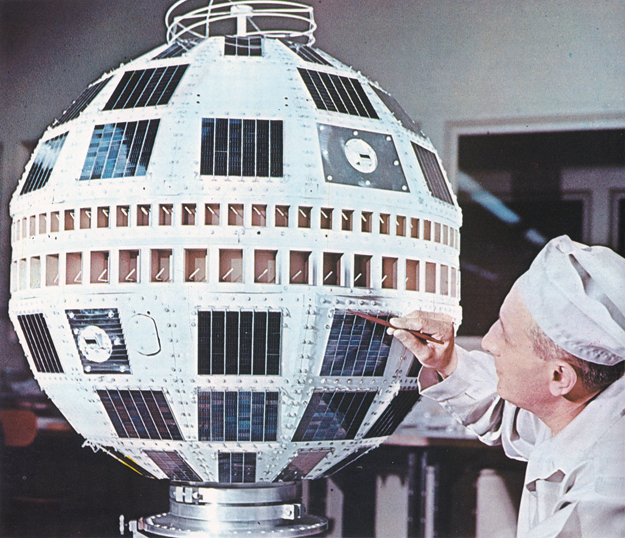 Bell Labs, the research arm of Alcatel-Lucent (Euronext Paris and NYSE: ALU) will celebrate one of its great historical achievements with the 50th anniversary of the launch of Telstar I, the world’s first active communications satellite. The launch on July 10, 1962, in partnership with NASA, ushered in the era of modern communications including real-time global telephone service, data communications and TV broadcasting.

Jeong Kim, President of Bell Labs said: “With Telstar and its successors, the world was made a smaller place, as billions of people around the world had instant access to news, sports and entertainment. The phrase ‘live via satellite’ became part of the common vernacular. At the time, few people would have believed that 50 years later you could actually talk to your house or car, or predicted that children would play video games with other children 10,000 miles away.”

“Today, as we celebrate the enormous achievement that Telstar represented, Bell Labs researchers are laying the foundation for communications and collaboration for the next 50 years,” Kim added. Visualizing what’s next in communications

In celebration of this historic moment, Marcus Weldon, Chief Technology Officer of Alcatel-Lucent has offered some predictions on the future of communications as well as some broader topics in society in a blog published today. Visitors to the blog can add their comments, or offer their own predictions on Twitter using the hashtag #Telstar50.

Also, with a nod to the past and an eye firmly on the future, Bell Labs will host a Telstar celebration on July 10 at 10:00 a.m., in the Murray Hill campus Arnold Auditorium. The event is open to interested media, Bell Labs alumni and Alcatel-Lucent employees, with an agenda includes:

* Walter Brown , original member of the Bell Labs Telstar I team who led semiconductor Physics research, and currently an adjunct professor of Materials Science and Engineering at Lehigh University in Bethlehem, PA.

* Lou Lanzerotti , former Bell Labs geophysicist and current distinguished research professor of Physics in the Center for Solar-Terrestrial Research at the New Jersey Institute of Technology

Telstar I, a sphere roughly a yard in diameter and weighing about 170 pounds, was a technology ‘tour de force,’ incorporating dozens of innovations from Bell Labs, including the transistor and solar panels, and was powered by 3,600 solar cells also invented by Bell Labs in 1954. The satellite could carry 600 voice calls and one black-and-white TV channel.

It was launched on top of a NASA Thor-Delta rocket and was placed in an elliptical orbit some 30,000 miles above the Earth’s equator, with a maximum transmission time between Europe and the United States of 20 minutes per pass. Once in orbit on July 10, the world’s first transatlantic television signal was beamed via Telstar from an earth station in Andover, Maine, USA, to a twin station in Pleumeur-Bodou, France. A signal was also received at a sister station in Goonhilly Downs, England. Telstar achieved many firsts – it was the first active, direct-relay communications satellite, it successfully transmitting through space the first television pictures, telephone calls, high-speed data communications and fax images, and the first live transatlantic television feed. Telstar 1 went out of service on February 21, 1963, with subsequent Telstar satellites taking its place, including Telstar 18, which launched in 2008.

Visit our website to learn more about how Telstar truly changed the world in which we live. About Alcatel-Lucent (Euronext Paris and NYSE: ALU)

The long-trusted partner of service providers, enterprises and governments around the world, Alcatel-Lucent is a leading innovator in the field of networking and communications technology, products and services. The company is home to Bell Labs, one of the world’s foremost research centers, responsible for breakthroughs that have shaped the networking and communications industry. Alcatel-Lucent was named one of MIT Technology Review’s 2012 Top 50 list of the “World’s Most Innovative Companies” for breakthroughs such as lightRadio(TM), which cuts power consumption and operating costs on wireless networks while delivering lightning fast Internet access. Through such innovations, Alcatel-Lucent is making communications more sustainable, more affordable and more accessible as we pursue our mission – Realizing the Potential of a Connected World. With operations in more than 130 countries and one of the most experienced global services organizations in the industry, Alcatel-Lucent is a local partner with global reach. The Company achieved revenues of Euro 15.3 billion in 2011 and is incorporated in France and headquartered in Paris.