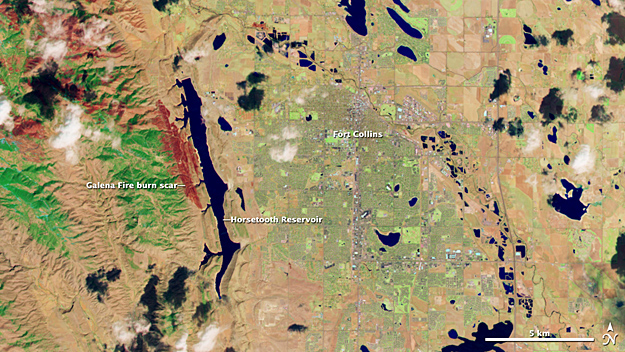 Link to the satellite’s first images taken on March 18, 2013 of the intersection of the U.S. Great Plains and the Front Range of the Rocky Mountains in Wyoming and Colorado. http://www.nasa.gov/mission_pages/landsat/news/first-images-feature.html

The stunning images follow the launch of the LDCM spacecraft on February 11, 2013 from California’s Vandenberg Air Force Base. Ball Aerospace built the sophisticated OLI instrument and also provided the cryocooler for TIRS, which was built by NASA Goddard Space Flight Center. The two sensors will coincidently collect multispectral digital images of the global land surface including coastal regions, polar ice, islands, and the continental areas.

“Release of the first image from LDCM is a great step toward ensuring these improved instruments provide the nation with the most up-to-date understanding of changes taking place across the planet,” said Robert D. Strain, Ball Aerospace chief operating officer and incoming president.

For the past 40 years, the Landsat series, managed by NASA and the U.S. Geological Survey, has provided vital management information on the use of land resources, such as food, water and forests. For example, data from Landsat helped forest managers determine best response methods and resource allocation for the mountain pine beetle infestation in the Rocky Mountain region. Triggered by an extended drought in the late 1990s and early 2000s, Landsat allowed forest managers to study changes in the ecosystem and identify areas where dead trees should be removed from recreation and camping areas to prevent wildfires.

“We are very proud that the advanced remote sensing technologies we’ve provided for the LDCM will nearly double data collected and returned to the U.S. Landsat archive,” said Strain. Instruments on earlier Landsat satellites employed scan mirrors to sweep the instrument fields of view across the surface swath width and transmit light to a few detectors. Ball’s OLI instrument instead uses long detector arrays, with over 7,000 detectors per spectral band, aligned across its focal plane to view across the swath. This “push-broom” design results in a more sensitive instrument providing improved land surface information.

Described as “the best Landsat ever launched” by LDCM project scientist Jim Irons, the data will significantly expand Landsat’s 40-year archive, the only system of its type with a mission to collect, archive and distribute data of all the Earth’s land surface for use by scientific, commercial and governmental agencies to understand the impact of global land changes.

Ball Corporation (NYSE: BLL) is a supplier of high quality packaging for beverage, food and household products customers, and of aerospace and other technologies and services, primarily for the U.S. government. Ball Corporation and its subsidiaries employ nearly 15,000 people worldwide and reported 2011 sales of more than $8.7 billion. For the latest Ball news and for other company information, please visit http://www.ball.com.