This launch begins the operational use of the Air Force’s Evolved Expendable Launch Vehicle program, the latest in technology for launching critical payloads into space.

EELV is a rocket system that can carry any type of payload while the main booster of the rocket remains the same. The user simply adds more boosters and smaller solid rocket boosters to increase lift for larger payloads.

The payload for the Atlas V was Hotbird-6, a European television and radio communications satellite.

“The Air Force took two contracts out on EELV to ensure that we always have assured access to space,” said Lt. Col. Tony Taliancich, director of Detachment 8, EELV Cape Consolidated Task Force. “With EELV we will have the ability to maintain reliability goals and drive down the cost of launch by 25 to 50 percent.” 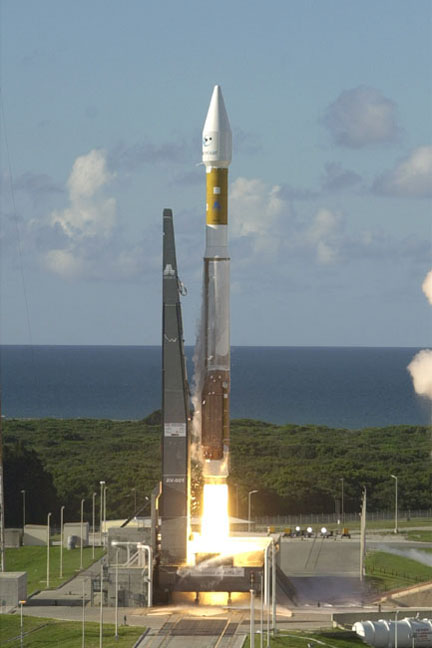 It was decided to split the contract in two and award it to Lockheed-Martin and Boeing so they could develop two distinct rocket programs that would be similarly capable of accomplishing what the Air Force required.

He said the operational use of two proven and reliable rocket systems like Atlas V and Delta IV will soon drive down the need for heritage rockets like the Titan IV, which costs almost $500 million.

“It’s the government’s effort to modernize its space launch fleet,” said Taliancich. “It was decided (by Congress in the mid-90s) that we needed a more modern launch vehicle to replace current systems, some 30 years old or more.”

In its largest configuration, the Atlas V and Delta IV will be the largest expendable rockets to launch since the Saturn V rocket sent man to the moon.

“Our awareness is up since this is the maiden voyage of this particular vehicle,” said Staff Sgt. Greg Jones, aerospace control officer from the 45th Range Squadron, responsible for making sure the airspace used for the launch will be clear and safe to use. “With the Atlas V and Delta IV coming online, this will continue to be the premiere gateway to space.”

The government has already agreed to 28 military and national security payloads to be launched by the Atlas V and Delta IV family of rockets.