By SpaceRef Editor
July 3, 2012
Filed under Alliant Techsystems, Commerce, US 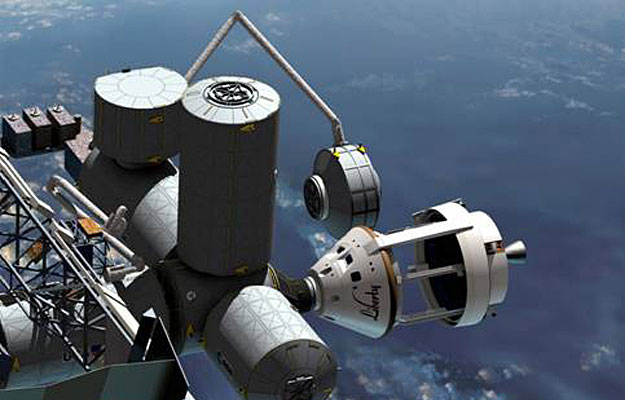 ATK the company leading development of the Liberty commercial spacecraft, is pleased to announce an expanded crew and cargo capability. The extended cargo configuration will allow the Liberty spacecraft to take full advantage of the launch vehicle lift capacity to transport a pressurized pod (the Liberty Logistics Module or LLM) along with the composite crew module. Based on NASA’s 15-foot diameter Multi-Purpose Logistic Module design, the LLM will include a common berthing mechanism and will be capable of transporting up to 5,100 pounds of pressurized cargo. With that capability, the LLM could be used to transport four full-size science racks to the International Space Station – along with a team of scientists to perform the associated science.

“Liberty’s expanded service allows us to bring a commercial capability delivering up to seven crew members, 5,000 pounds of pressurized cargo, along with external cargo in a single flight,” said Kent Rominger, ATK vice president and program manager for Liberty. “This results in tremendous value since all other commercial offerings would need two flights to accomplish what Liberty does in one.”

While on the launch pad and during launch, the LLM will be fully protected by a lightweight shroud. Once the launch vehicle is through the earth’s atmosphere, the shroud is no longer needed and will be jettisoned, maximizing payload capability.

The Liberty team is developing a complete commercial space service to revolutionize access to Earth orbit. The system is built on safety, reliability and market value, all essential to the success of the emerging commercial market and NASA. Blending new composite and electronics technology with the lessons learned in 50 years of human spaceflight produces a unique capability for human space flight. Liberty is an international venture dedicated to using the best people, lean production processes and flight-proven hardware to significantly reduce the cost while dramatically increasing the safety of space access.

Liberty is a complete commercial crew system that includes a human-rated composite spacecraft, advanced abort system, a reliable, affordable and capable commercial launch vehicle to low Earth orbit and ground and mission operations, which were all designed from inception to meet NASA’s human-rating requirements. Unmanned test flights are planned for 2014 and 2015, followed by the first human flights in 2015 with a Liberty flight crew flying to the International Space Station.

The Liberty system team is located across 10 states including Alabama, California, Florida, Maryland, Mississippi, New York, Ohio, Texas, Utah and Virginia. The commercial program is expected to sustain thousands of jobs as well as bring approximately 600 new jobs across the country.

More information on the Liberty Transportation Service can be found at www.libertyspace.us.

ATK is an aerospace, defense, and commercial products company with operations in 22 states, Puerto Rico, and internationally. News and information can be found on the Internet at www.atk.com.

Certain information discussed in this press release constitutes forward-looking statements as defined in the Private Securities Litigation Reform Act of 1995. Although ATK believes that the expectations reflected in such forward-looking statements are based on reasonable assumptions, it can give no assurance that its expectations will be achieved. Forward-looking information is subject to certain risks, trends and uncertainties that could cause actual results to differ materially from those projected. Among those factors are: the challenges in developing a new commercial launch vehicle; assumptions regarding the market for the Liberty Transportation Service; changes in governmental spending, budgetary policies and product sourcing strategies; the company’s competitive environment; the terms and timing of awards and contracts; and economic conditions. ATK undertakes no obligation to update any forward-looking statements. For further information on factors that could impact ATK, and statements contained herein, please refer to ATK’s most recent Annual Report on Form 10-K and any subsequent quarterly reports on Form 10-Q and current reports on Form 8-K filed with the U.S. Securities and Exchange Commission.